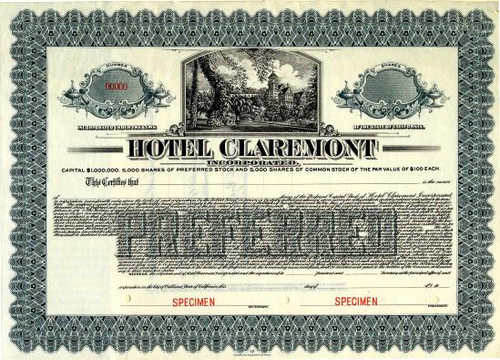 Beautifully engraved RARE specimen certificate from the Hotel Claremont, Incorporated printed around 1915. This historic document was printed by Franklin-Lee Bank Note Company and has an ornate border around it with a vignette of the Hotel Claremont. This item is over 100 years old.

Certificate Vignette
The Hotel Claremont was designed by the architectural firm of Dickey and Reed, for Frank Havens and Frank "Borax" Smith of the "Realty Syndicate" . The Hotel was a destination for point for Frank Smith's Key Route Line and attracted property development for the Realty Syndicate who owned adjacent land in the Claremont and Rockridge areas. The Claremont Hotel is actually located in Oakland, but has advertised for years as a Berkeley establishment. It opened in 1915, just in time for the Pan Pacific International Exposition in San Francisco. The Claremont Hotel Company began building in 1905, but the infamous earthquake of 1906 and subsequent Panic of 1907 interrupted construction. The additional land the Claremont Resort & Spa now rests on was purchased in 1908 and after much turmoil, The Claremont Hotel opened for business in 1915 as the sprawling Mediterranean hostelry seen today. From the charming rural surrounding and expansive veranda and lobby, larger than any other hotel on the Pacific Coast, to the on-site private school and radio station, The Claremont Hotel was one of the nation's grand transient and resident hotels. In 1937 Claude Gillum, who had been with The Claremont since 1926, purchased the property for $250,000 and virtually rebuilt it from the foundation up, completely refurbishing the interior. About Specimens Specimen Certificates are actual certificates that have never been issued. They were usually kept by the printers in their permanent archives as their only example of a particular certificate. Sometimes you will see a hand stamp on the certificate that says "Do not remove from file". Specimens were also used to show prospective clients different types of certificate designs that were available. Specimen certificates are usually much scarcer than issued certificates. In fact, many times they are the only way to get a certificate for a particular company because the issued certificates were redeemed and destroyed. In a few instances, Specimen certificates we made for a company but were never used because a different design was chosen by the company. These certificates are normally stamped "Specimen" or they have small holes spelling the word specimen. Most of the time they don't have a serial number, or they have a serial number of 00000. This is an exciting sector of the hobby that grown in popularity over the past several years.

Postcard of a beautiful home in Claremont, Berekeley, California