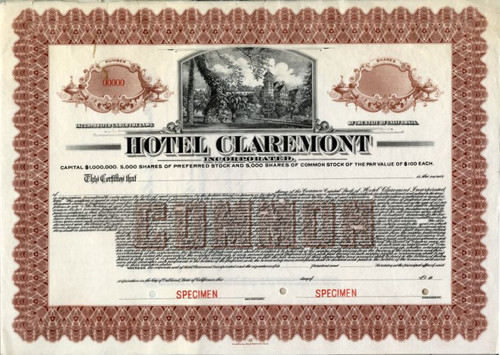 Beautifully engraved specimen certificate from Hotel Claremont, Inc. printed around 1915. This historic document was printed by the Franklin - Lee Banknote Company and has an ornate border around it with a vignette of the Hotel Claremont. 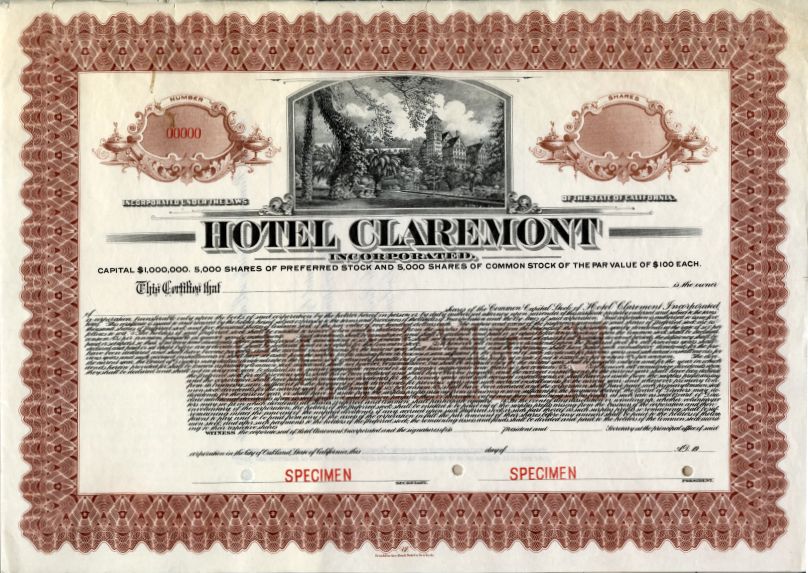 Certificate
The Hotel Claremont was designed by the architectural firm of Dickey and Reed, for Frank Havens and Frank "Borax" Smith of the "Realty Syndicate" . The Hotel was a destination for point for Frank Smith's Key Route Line and attracted property development for the Realty Syndicate who owned adjacent land in the Claremont and Rockridge areas. The Claremont Hotel opened in 1915, just in time for the Pan Pacific International Exposition in San Francisco. The Claremont Hotel Company began building in 1905, but the infamous earthquake of 1906 and subsequent Panic of 1907 interrupted construction. The additional land the Claremont Resort & Spa now rests on was purchased in 1908 and after much turmoil, The Claremont Hotel opened for business in 1915 as the sprawling Mediterranean hostelry seen today. From the charming rural surrounding and expansive veranda and lobby, larger than any other hotel on the Pacific Coast, to the on-site private school and radio station, The Claremont Hotel was one of the nation's grand transient and resident hotels. In 1937 Claude Gillum, who had been with The Claremont since 1926, purchased the property for $250,000 and virtually rebuilt it from the foundation up, completely refurbishing the interior. The Claremont Hotel Club & Spa is a historic hotel at the foot of Claremont Canyon in the Berkeley Hills. The location provides scenic views of San Francisco Bay. The main hotel building is entirely in Oakland. However, a portion of the property, which includes the spa, the gardens and parking area, falls within the city limits of Berkeley, and the resort's mailing address is Berkeley Tunnel Road, Berkeley CA 94705). The Berkeley Tennis Club leased a portion of the hotel grounds from 1917 to 1945. In 1945, the Club purchased this section of the grounds, and remains located at 1 Tunnel Road, Berkeley next to the Hotel. The Claremont has 279 guest rooms, a 20,000-square-foot (1,900 m2) spa, 10 tennis courts, and 22 acres (8.9 ha) of landscaped gardens. Romantic stories tell that it was once won in a checkers game. The Hotel was nominated and deemed eligible for listing on the National Register of Historic Places in 2003, but was not listed due to owner objection. It is a designated Oakland City Historical Landmark. The Claremont opened in 1915 as the Claremont Hotel, named for the Claremont district where it is situated. It was constructed by a group of real estate developers that included mining magnate "Borax" Smith. The group was associated with the Key System, and had already opened another large hotel, Key Route Inn, in Oakland at Grand Avenue and Broadway. The Key Route Inn suffered a serious fire in September 1930 and was demolished in April and May 1932. As with the Key Route Inn, a transbay Key Route line (eventually designated the "E" line) ran right to the doors of the Claremont Hotel, approaching from between the tennis courts. Thus, Claremont Hotel guests not only had a magnificent view of San Francisco, but could go there directly from the doorsteps of the lobby. The tracks were removed in 1958 when the Key Route System was dismantled, but the tennis courts survive, separated by a path where the tracks used to be. The hotel was also convenient to automobile traffic, as it was situated along the principal route over the Berkeley Hills via Claremont Canyon. In 1903, a small tunnel was excavated above the next canyon south of Claremont Canyon, accessible by a new road dubbed Tunnel Road, which ran from the end of Ashby Avenue. The same route later led to a newer, larger tunnel called the Caldecott Tunnel, which opened in 1937. The street address of the Claremont is still 41 Tunnel Road. Tunnel Road is a designated part of State Highway 13. In 1876, a state law was passed that prohibited the sale of alcoholic beverages within one mile (1.6 km) of the perimeter of the University of California. As the Claremont Hotel was under construction, its investors noticed it was just inside this no-alcohol zone. They determined to fight the definition so that they could make more money by serving alcohol. In 1913, the hotel's investors sponsored AB 1620 (known as the Ferguson bill), supposedly to further restrict alcohol near churches and schools statewide, but it specifically excluded the Claremont Hotel from the dry zone. Influenced by activism from women's clubs and temperance groups in Berkeley, the Ferguson bill was defeated by one vote. In 1933 when Prohibition was repealed, the Claremont Hotel continued to suffer from the state law prohibiting the sale of liquor within a mile of the university. In 1937, the law was amended to measure the distance following street routes rather than a straight line, and the hotel was then able to serve liquor legally. According to a story on the hotel's website, a student at the University discovered in 1936 that the route was over a mile and was awarded free drinks for life. This point had been publicly discussed in 1913, however. The hotel had an unusual fire escape, a multi-story spiral slide for guests to make their escape. Many local teenagers were said to have taken the ride but the slide was eventually boarded up, and removed. The Claremont faced destruction in the 1991 Oakland firestorm, but the flames were stopped just short of the hotel. In 2007, the Claremont was acquired by Morgan Stanley. On February 1, 2011, the resort filed for bankruptcy due to losses attributed to the ongoing recession Lenders including Paulson & Co., Winthrop Realty Trust and Capital Trust foreclosed on the property. In 2013, the owners reached a deal to sell the Claremont and three other properties to the Government of Singapore Investment Corporation. The Claremont was purchased in March 2014 by the Fairmont Hotel chain and financier Richard Blum. History from Wikipedia, Encyberpedia and OldCompany.com (old stock certificate research service)

American Board of Commisioners for Foreign Missions - Boston, Massachusetts 1904