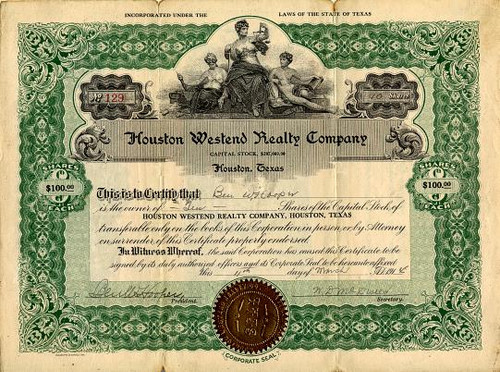 Beautiful certificate from the Houston West end Realty Company issued in 1914. This historic document was printed by McQuiddy Printers and has an ornate border around it with a vignette of a group of allegorical women and men. This item has the signatures of the Company's President, Ben W. Hooper and Secretary and is over 93 years old. The certificate was issued to Ben Walter Hooper and signed by him on the back. Shows some signs of wear with tape repair on back. 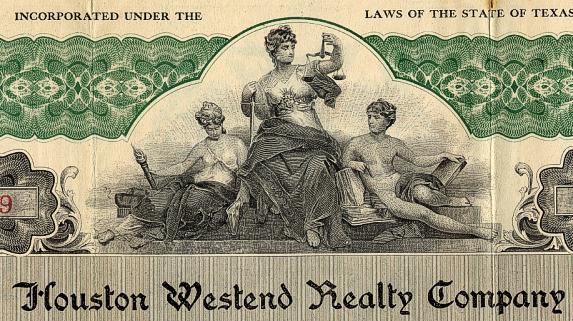 Certificate Vignette
West University History The idea for a community of country homes in the area that is now West University Place was conceived in 1910 by Ben W. Hooper, then Governor of Tennessee. That year, Governor Hooper bought a tract of land southwest of Houston out of an old Spanish land grant, which had been surveyed by A.C. Reynolds. The Houston West End Realty Company, developed today's West University Place First Addition and put the first lots up for sale on April 1, 1917. The area's proximity to Rice University led to the name West University Place. Ben Walter Hooper (18701957) was governor of the U.S. state of Tennessee from 1911 to 1915. Hooper, who was of illegitimate birth, spent part of his childhood in an orphanage, was unofficially "adopted" by members of his rural Baptist church, and was belatedly acknowledged by his natural father, a prominent physician. He was a native of Newport in Cocke County, Tennessee. He was admitted to the bar in 1894, and served in the state legislature. He was a captain of volunteer forces in the Spanish-American War of 1898, and nominated by the Republicans for governor in 1910 over Alfred A. Taylor. His initial Democratic opponent, incumbent Governor Malcolm R. Patterson, withdrew. The Democrats then nominated United States Senator (and three-term former governor) Robert Love Taylor, Alf Taylor's younger brother. The Prohibition issue had badly split the Democrats and a faction of them called the "Independents" endorsed Hooper for governor, leading to his election. During legislative sessions during Hooper's administration, armed guards were employed. Nonetheless, he was reelected in 1912, but was subsequently defeated for a third term in 1914 by Democrat Thomas C. Rye, a Prohibition advocate. During his terms, early child labor laws were enacted and school attendance was made compulsory for young children provided that they lived within a realistic walking distance of a school. The method of the death penalty was changed from hanging to electrocution. Hooper continued the practice of law after his time as governor and maintained a keen interest in public affairs and Republican politics until just before his death in 1957. He wrote an autobiography, The Unwanted Boy, and was widely regarded in East Tennessee as an inspirational figure. Ben Hooper did not have a known father. Back in the days of his youth people would only recognize and give children credibility if they knew who their fathers were. Ben, however, was ostracized by society because he knew not his father. He was walking once and met a pastor, and the pastor said to Ben, "who's son are you?", and Ben, not knowing what to say, not having an inheritance to put his name to started shuffling and huffing. The pastor then looked at the boys face and said, "wait a minute, the resemblance is uncanny". I know who's son you are, why you're a son of God aren't you!" At that moment, Ben said to a pastor he met in his old retired state, my life was changed".