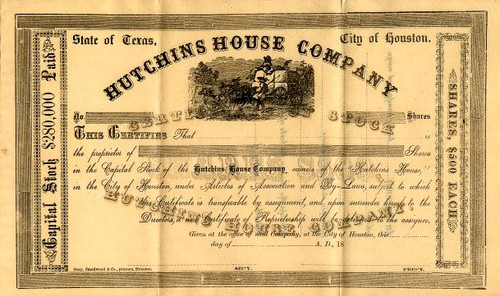 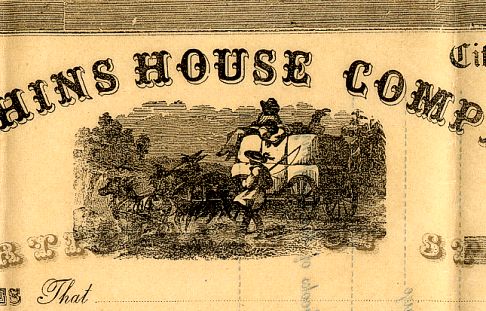 Certificate Vignette
HUTCHINS, WILLIAM J. (1813-1884). William J. Hutchins, railroad developer, son of J. B. and Ruth (Rushmore) Hutchins, was born on March 3, 1813, at Fishkill, Duchess County, New York. In early childhood he was taken to New Bern, North Carolina, where he received his education and for a short time was principal of the high school. At the age of twenty-two Hutchins went to Tallahassee, Florida. After three years as a merchant, he moved to Houston, capital of the new Republic of Texas, where in 1844 he married Elvira Harris, a native of Arkansas. He ran a private bank and operated an extensive mercantile business, which he sold in 1860 to McIlhenny, Willis, and Brothers. In the 1850s Hutchins was a partner in the Houston Navigation Company, which dominated steamboat traffic between Houston and Galveston. He was also one of the incorporators of the Brazos Plank Road Company, though the company's projected road was not built. He was also one of the incorporators of the Buffalo Bayou, Brazos and Colorado Railway. In 1860 Hutchins, Abram Morris Gentry, and others incorporated the State Star Telegraph Company to build lines throughout the state. That year he was the second wealthiest man in Houston, with an estate that was worth $700,000 and included six slaves. In 1861 he built Hutchins House, at that time the state's largest hotel. At a sheriff's sale in 1861, he and David H. Paige bought the Houston and Texas Central Railway for $10,000; for seven years Hutchins served as president and general manager of this line, in which role he gave his name to the town of Hutchins, near Dallas. The sale of his interests in the H&TC in 1880 closed his career as a railroad man. Hutchins was alderman of Houston for several terms and mayor in 1861. He was one of the organizers of the Houston Cotton Compress Company in 1860 and of the City Cotton Mills in 1865. The Board of Trade and Cotton Exchange (later the Houston Cotton Exchange and Board of Tradeqv) chose him its first vice president. With the rank of lieutenant colonel, Hutchins was made chief of the Texas Cotton Bureau when it was established, on December 1, 1863. Its task was the heavy one of obtaining cotton, getting it to foreign markets, and bringing back arms and supplies for the Confederate Army. By 1870 Hutchins's fortune was down to $200,000, mostly in real estate. He withdrew from banking in 1873 and from his great wholesale business in 1877. He retained extensive real estate and other holdings at the time of his death at Fort Worth, on June 4, 1884. He was survived by his widow, five sons, and two daughters. History from Handbook of Texas Online and OldCompanyResearch.com (old stock certificate research service).