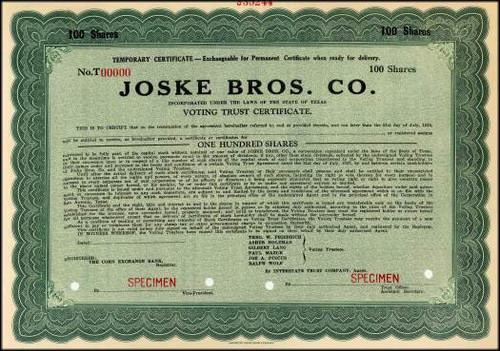 Beautifully engraved SPECIMEN certificate from the Joske Bros. Company. This historic document was printed by the American Banknote Company in 1927 and has an ornate border around it. A History of Joskes Time Line 1867 Julius Joske opened his first store in San Antonio TX. 1873 Joske sold his store and returned to Berlin for his family. Joske returned later that year and opened a new store, J. Joskes and Sons. 1875 Store moved to Alamo Plaza and the name was changed to Joske Bros. 1878 Joske Bros. added a women's apparel department. 1887 Joske Bros. moved to the corner of Alamo St. and Commerce St. 1903 Alexander Joske purchased his father and brothers share of the company and became president. The name was changed to Joskes. 1909 Store expanded again; new floors, elevators, delivery, and a customer service department were added. 1925 Alexander Joske dies and son-in-law, Dr. Fredric Goldstein Oppenheimer, became president. 1929 Hahn Department Stores bought Joskes. 1932 Allied Store Corp. takes over and James Cavert became president. The rest of the Joskes block was bought, excluding St. Joseph's Church. Parking is increased, store becomes first to be completely air-conditioned, escalators are introduced and over 100,000 sq. ft. is added. 1946 Equivalent warehouse space is added. 1953 Store size is doubled to over 551,000 sq. ft. and parking added up to over 20 acres. 1950's Chain is made by adding stores in North Star, Las Palamas, and a Joskes in Austin. 1986 Campeau Corp. of Toronto purchases Allied. 1987 Dillards takes over Campaeu and Joskes is now Dillards. About Specimens Specimen Certificates are actual certificates that have never been issued. They were usually kept by the printers in their permanent archives as their only example of a particular certificate. Sometimes you will see a hand stamp on the certificate that says "Do not remove from file". Specimens were also used to show prospective clients different types of certificate designs that were available. Specimen certificates are usually much scarcer than issued certificates. In fact, many times they are the only way to get a certificate for a particular company because the issued certificates were redeemed and destroyed. In a few instances, Specimen certificates we made for a company but were never used because a different design was chosen by the company. These certificates are normally stamped "Specimen" or they have small holes spelling the word specimen. Most of the time they don't have a serial number, or they have a serial number of 00000. This is an exciting sector of the hobby that grown in popularity and realized nice appreciation in value over the past several years.