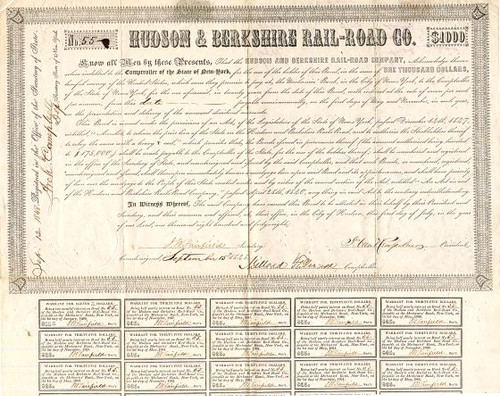 Beautiful certificate from the Hudson & Berkshire Rail-Road Co issued in 1848. This historic document was printed by George F. Nesbitt, Stationer and Printer Company and has an ornate border around it. This item has the signatures of the Company's President, Secretary, and Comptroller Millard Fillmore and is over 161 years old. 2 small pieces of tape residue from when the certificate was probably framed.

Millard Fillmore's signature as Comptroller
Millard Fillmore (January 7, 1800 March 8, 1874) was the thirteenth President of the United States, serving from 1850 until 1853, and the last member of the Whig Party to hold that office. He was the second Vice President to assume the Presidency upon the death of a sitting President, succeeding Zachary Taylor who died of what is thought to be acute gastroenteritis or hyperthermia (heat stroke). Fillmore was never elected President; after serving out Taylor's term, he failed to gain the nomination for the Presidency of the Whigs in the 1852 presidential election, and, four years later, in the 1856 presidential election, he again failed to win election as the Know Nothing Party and Whig candidate. Hudson and Boston Railroad Corporation. On April 26, 1832, the State of New York chartered The Hudson and Berkshire Railroad Company and made certain advances to aid the construction of its line, which was completed from Hudson to Chatham Four Corners and was opened for use in September, 1838. Owing to a default in the repayment of its advances, the State of New York sold the line November 21, 1854, and it was purchased in the interests of the Western Railroad Corporation and was then reorganized as the Hudson and Boston Railroad Corporation. History from Wikipedia and OldCompany.com (old stock certificate research service)