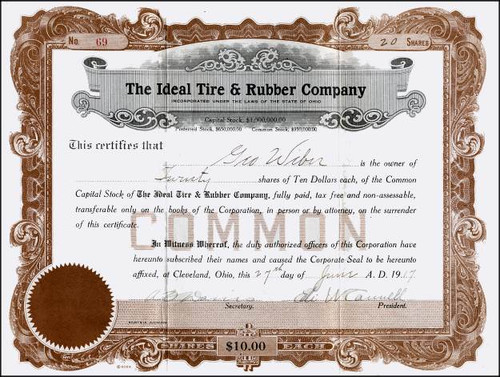 Beautifully printed certificate from the Ideal Tire & Rubber Company issued in 1917. This historic document has an ornate border around it with the company's name on top center. This item has the hand signatures of the Company's President ( Eli W. Cannell ) and Secretary ( Arthur Stanley Davies ). Old News Articles: Arthur Stanley Davies was secretary and director of the Ideal Tire & Rubber Company, a $2,000,000 Ohio corporation, with a model plant now in course of construction in the Cleveland district to be operated for the manufacture and production of tires, the first and most promising large organization to bring this branch of the rubber industry to Cleveland. Mr. Davies is a man of much financial and accounting experience, and has achieved a commendable business position at the age of thirty. He was born at Wadsworth , Ohio, April 23, 1888, a son of Isaac and Miriam (Thomas) Davies. His father died in September, 1917, and the mother is still living in Cleveland. Arthur S. Davies was educated in grammar and high schools, and left school to take up the occupation and profession of accountant. For five years he was an accountant with a contracting concern, and or another five years was office manager of a manufacturing business. On taking up his duties as secretary of the Ideal Tire and Rubber Company he resigned his position of auditor of the Buckeye Engine Company of Salem, Ohio, a community where his ability and services were most highly appreciated and esteemed. Mr. Davies is a member of the Cleveland Automobile Club, is a republican voter, a Baptist, and a member of the Independent Order of Foresters. April 15, 1916, at Cleveland he married Margaret Ann Hodges, daughter of William Hodges. They have one daughter Rachel Margaret Davies. 1917 Newpaper Clipping: I. R. Davies is treasurer and manager of The Ideal Tire and Rubber Company, the first large branch of the rubber industry to be located at Cleveland. It is an Ohio corporation, capitalized at $2,000,000. The company was organized and the campaign for sale of securities started in August, 1917, and by the end of that year the company had over 1,500 shareholders, had raised over $500,000. The company have a model factory in course of construction, so far carried out toward realization as to present every reasonable assurance that manufacturing operations will begin early in the year 1918. The organization of The Ideal Tire and Rubber Company is an important step in a movement to give Cleveland, with its immensely superior natural advantages, its proper share of the great rubber industry. Fortunately for the company men of seasoned experience and expert ability have been attracted to its executive offices and directors. The superintendent of the factory is B. E. Frantz, formerly superintendent of another large rubber company in Ohio, and with an experience of twelve years in executive positions with some of the largest tire companies in the United States. The president of the company is Eli W. Cannell, who is a man of wide experience and president of The Provident Building Loan Company. Mr. I. R. Davies, who has head of the finance department, has already achieved a remarkable record in getting the financial organization of the company thoroughly and broadly founded, has had an extended experience of many years with the rubber and other manufacturing industries. He was born at Doylestown, Ohio, December 6, 1881, a son of I. Davies and Miriam (Thomas) Davies. His father died at Cleveland in September, 1917, and his mother still lives in this city. I. Davies was for twenty-fire years a steel worker, and had lived retired about four years before his death. He was a resident of Cleveland nearly thirty years. I. R. Davies attended the common grammar school and the high school at Cleveland, also a commercial college, and began business as an accountant. For ten years he was in the employ of the United States Steel Corporation, and also had two years of banking experience. For four years he was employed in executive capacities with some of the large rubber industries and is a stockholder in both steel and rubber corporations, and an officer an director in two large rubber companies. Mr. Davies is affiliated with the Masonic Order, Knights of Pythias and a number of social and business organizations. He belongs to Rockton Lodge, Free and Accepted Masons, at Kent, Ohio, and Kent Chapter No. 192, Royal Arch Masons. He is a member of the Baptist Church. At Cleveland, April 21, 1913, Mr. Davies married Mabel Reese, daughter of John Reese of Cleveland. Eli Wesley CANNELL BIRTH: 05 FEB 1844, Newburgh OH USA Jane (Quiggin) Cannell's 1884 Bible in Scott Cannell's keeping (131) DEATH: 28 DEC 1924, Cleveland OH USA Obituary Cleveland Newspaper BURIAL: Harvard Grove Cemetery Grave Stone Inspection 1995 tcd OCCUPATION: Owner of a feed & grain store at 2557-9 Broadway Officer of Provident Building & Loan, 8425 Broadway, 1893-1924: Mead[e] Lumber Co., Miles Ave Lumber Co., organizer & president until 1906; South Cleveland Banking Co., director 1894, president 1901-06; Ideal Tire and Rubber Company, President; Odd Fellows of Newburg officer & representative to the State Grand Lodge; South End Chamber of Enterprise, president.