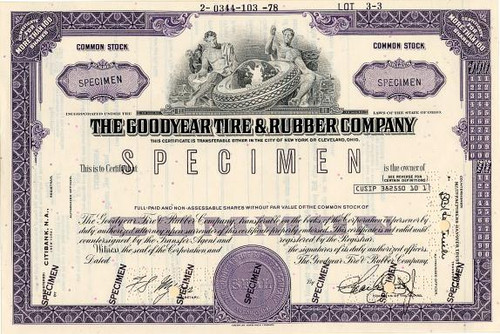 Beautiful engraved RARE specimen certificate from the Goodyear Tire & Rubber Company dated 1978. This historic document was printed by American Bank Note Company and has an ornate border around it with a vignette of two allegorical men and a tire around a globe. This item has the printed signatures of the Company's President and Secretary and is over 29 years old. 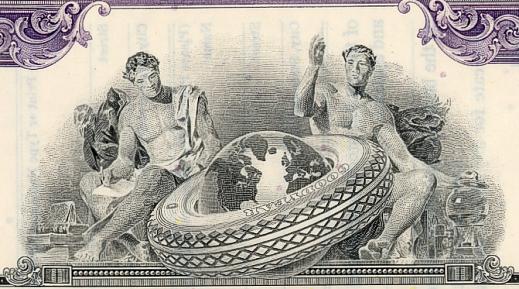 Certificate Vignette
The Goodyear Tire and Rubber Company was founded in 1898 by Frank Seiberling. Today it is the third largest tire and rubber company in the world after Bridgestone and Michelin. It manufactures tires for street automobiles, race cars, airplanes, and heavy machinery. In addition it makes rubber hoses, shoe soles, and parts for electric printers. Although the company was not connected with him, it was named in honor of Charles Goodyear. Goodyear invented vulcanized rubber in 1839. Goodyear is known throughout the world because of its famous Goodyear Blimps. For many years it maintained an aerospace subsidiary, first named Goodyear Aircraft Company and then after World War II renamed Goodyear Aerospace Corporation. The subsidiary was sold in 1987 to Loral Corp., in the aftermath of Sir James Goldsmith's greenmail attack. The last major restructuring of the company took place in 1991. Goodyear hired Stanley Gault, former CFO of Rubbermaid inc, to expand the company into new markets. The moves resulted in 12,000 employees being laid off. Timeline 1898 -- production begins in with 13 workers, manufacturing bicycle & carriage tires, rubber pads for horseshoes, & poker chips. 1901 -- Seiberling offers racing tires to Henry Ford to help him get started in automobile racing. 1908 -- Ford's Model T is outfitted with Goodyear tires. 1909 -- builds its first aircraft tire. 1911 -- constructs its first airship envelope. 1917 -- produces airships & balloons for the U.S. military during World War I 1919 -- tires on the winning car at the Indianapolis 500. 1922 -- facing a growing economic depression Goodyear stops race tire production. 1926 -- world's largest rubber company. 1935 -- purchases competitor Kelly-Springfield Tire 1942 -- awarded contract to make Corsair fighter planes for the US military. 1956 -- Goodyear-operated U235 atomic processing plant opens in Ohio (USA) 1958 -- attempting to counter a "stodgy" marketing image, Goodyear officially reenters racing. 1969 -- annual sales top $3 billion USD as a result of significant expansions 1974 -- annual sales reach $5 billion USD, now has facilities in 34 countries 1978 -- announces that an idle Akron tire plant will be converted into a $75 million USD Technical Center to support research & tire design efforts 1979 -- Goodyear Aerospace produces the MPP computer, a massively parallel supercomputer, for NASA's Goddard Spaceflight Center 1982 -- Goodyear' tires appear in the motion picture The Junkman with H.B. Halicki. 1984 -- worldwide sales exceed $10 billion USD 1986 -- Sir James Goldsmith & investment group Hanson initiate a takeover attempt by purchasing 11 percent of outstanding Goodyear stock 1987 -- in order to fend off the Goldsmith takeover & prevent other attempts, Goodyear completes a massive restructuring, selling subsidiaries and closing plants. 1987 -- announces completion of a California to Texas "All American" oil pipeline. 1988 -- announced plans to begin construction on a new state-of-the-art tire plant in Napanee, Ontario, Canada for a cost of $320 million. 1990 -- sales top $11 billion USD. 1994 -- opens an "electronic store" on the CompuServe network 1999 -- sets up Goodyear Dunlop joint venture in Europe with Sumitomo Rubber. 2001 -- Injection molding will be the breakthrough technology for tire- building, according to John Jentgen, head of manufacturing at Goodyear's Colmar-Berg factory. By injection molding the bead package, Goodyear is able to assemble and partially cure a number of different compounds into an easily handled component. This package streamlines the tire assembly process and allows for greater precision in the design of tires since layers of rubber and reinforcements no longer are subjected to bending forces around the bead in the curing press 2003 -- Goodyear Great Britain Head office at Wolverhampton ceases car tyre manufacture 2004 -- launches Assurance Tire with "Triple Tred" technology for any weather conditions for cars 2005 -- launches Wrangler & Fortera Tires with "Silent Armor" Technology & Kevlar 2005 -- launches Fortera Tires with "Triple Tred" technology for SUVs 2006 -- launches Eagle Featuring ResponsEdge Technology 2006 -- names McCann Erickson in NYC, agency of record 2006 -- ceases car tyre production in the UK with the closure of its Washington plant 2006 -- Goodyear workers in the U.S. and Canada go on strike 2007 -- Goodyear workers go back to work after strike ends. As part of the negotiations to end the strike, Goodyear agreed to drastically reduce its operations in Valleyfield, Quebec No Firearms Corporate Policy Recently customers have noticed a "no firearms allowed" sign posted on the entrance doors to all Goodyear stores. The official response from the company is as follows: In an effort to ensure the safety and security of our associates and customers, we have a clear company policy regarding weapons in the workplace. The Goodyear Tire and Rubber Co. prohibits all persons who enter Company property from carrying a handgun, firearm, or prohibited weapon of any kind onto the property regardless of whether the person is licensed to carry the weapon or not. Exceptions apply to on-duty law enforcement personnel. This policy applies to all Company employees, visitors, customers, and contractors on Company property -- including our Company-owned stores. All Company properties have received a decal or sign referencing this policy, and have been instructed to post it. The policy also restricts off-duty officers of the law from carrying a firearm into the store as well. History from Wikipedia and OldCompanyResearch.com. About Specimens Specimen Certificates are actual certificates that have never been issued. They were usually kept by the printers in their permanent archives as their only example of a particular certificate. Sometimes you will see a hand stamp on the certificate that says "Do not remove from file". Specimens were also used to show prospective clients different types of certificate designs that were available. Specimen certificates are usually much scarcer than issued certificates. In fact, many times they are the only way to get a certificate for a particular company because the issued certificates were redeemed and destroyed. In a few instances, Specimen certificates we made for a company but were never used because a different design was chosen by the company. These certificates are normally stamped "Specimen" or they have small holes spelling the word specimen. Most of the time they don't have a serial number, or they have a serial number of 00000. This is an exciting sector of the hobby that grown in popularity over the past several years.