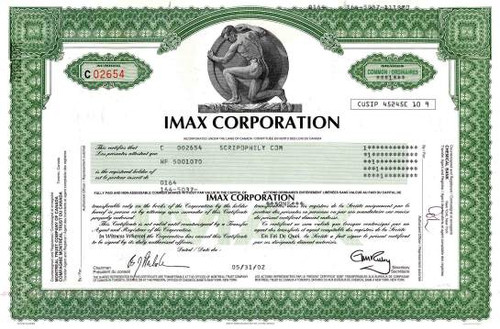 Beautifully engraved certificate from the Imax Corporation. This historic document was printed by the British American Banknote Company and has an ornate border around it with a vignette of an allegorical man. This item has the printed signatures of the Company's Chairman and Secretary. 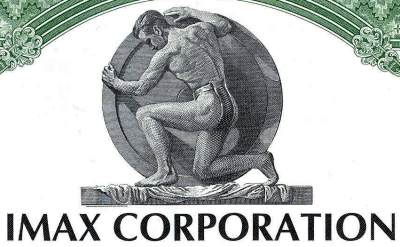 Certificate Vignette
IMAX Corporation ("IMAX"), founded in 1967 and headquartered jointly in New York City and Toronto, Canada, is one of the world's leading entertainment technology companies, with particular emphasis on film and digital imaging technologies including 3D, post-production and digital projection. IMAX is a fully-integrated, out-of-home entertainment enterprise with activities ranging from the design, leasing, marketing, maintenance, and operation of IMAX® theatre systems to film development, production, post-production and distribution of large-format films. IMAX also designs and manufactures cameras, projectors and consistently commits significant funding to ongoing research and development. HISTORY The IMAX system has its roots in EXPO '67 in Montreal, Canada where multi-screen films were the hit of the fair. A small group of Canadian filmmakers/entrepreneurs who had made some of those popular films, decided to design a new system using a single, powerful projector, rather than the cumbersome multiple projectors used at that time. The result: the IMAX motion picture projection system, which would revolutionize giant-screen cinema. IMAX technology premiered at the Fuji Pavilion, EXPO '70 in Osaka, Japan. The first permanent IMAX projection system was installed at Ontario Place's Cinesphere in Toronto in 1971. IMAX Dome (OMNIMAX) debuted at the Reuben H. Fleet Space Theatre in San Diego in 1973. In March of 1994, the sale of IMAX by the original partners was finalized to Brad Wechsler, Rich Gelfond, and Wasserstein Perella Partners. In June 1994, IMAX was taken public on the Nasdaq stock exchange providing IMAX with the capitalization necessary to take advantage of numerous growth opportunities. TECHNOLOGY Images of unsurpassed size, clarity and impact, enhanced by a superb specially-designed six-channel, multi-speaker sound system, are projected onto giant rectangular screens, up to eight-storeys high, in the case of IMAX technology and in the case of IMAX Dome theatres onto domes as large as 27m (88'-5") in diameter. The IMAX projector uses film ten times larger than a conventional 35mm frame and three times bigger than a standard 70mm frame. The sheer size of a 15/70 film frame, combined with the unique IMAX projection technology, is the key to the extraordinary sharpness and clarity of 15/70 format films. IMAX projectors are the most advanced, highest-precision and most powerful projectors ever built. The key to their superior performance and reliability is the unique "Rolling Loop" film movement. The Rolling Loop, originally invented by Ron Jones, an Australian, adapted and enhanced by IMAX, advances the film horizontally in a smooth, wave-like motion. During projection, each frame is positioned on fixed registration pins, and the film is held firmly against the rear element of the lens by a vacuum. As a result, the picture and focus steadiness are far above normal standards. IMAX Corporation also offers extensive customer support services to filmmakers who lease IMAX cameras. The company's camera rental inventory offers 25 cameras including three compact dual-strip IMAX 3D cameras and two lightweight IMAX MARK II cameras for steadicam work. The IMAX Theatre Network currently consists of more than 225 IMAX affiliated theatres in 30 countries. Approximately 60 percent of the theatres are located in North America, while the remaining 40 percent are spread internationally. Roughly 50 percent of the theatres are located in institutional venues, such as museums, planetariums, and maritime centres, while the other half are part of commercial theatre complexes. More than 100 of these theatres are equipped with IMAX 3D technology. To date, more than 700 million people have enjoyed The IMAX Experience® at specially designed theatres around the world. IMAX Corporation is a publicly traded company listed on both the Toronto and NASDAQ stock exchanges. EMPLOYEES IMAX Corporation employs more than 800 people worldwide. This company informaion is from IMAX Marketing material.