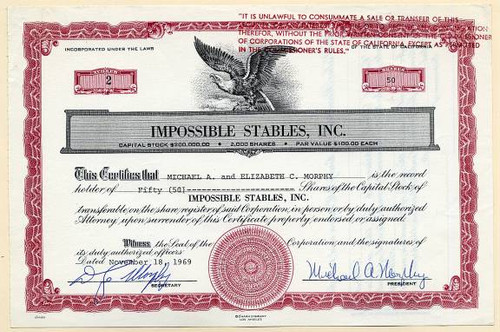 Beautiful certificate from the Impossible Stables, Inc. This historic document was printed by the Goes Company and has an ornate border around it with a vignette of an eagle. This item has a hand written signature of the Company's President, Michael Morphy and Secretary, and is over 41 years old.

Certificate Vignette
Michael Alan Morphy, the commissioner for the equestrian events at the 1984 Olympics, died Feb. 19, 1998 in Montecito , Calif. , of a heart ailment.He was 65. A graduate of Trinity College ( Conn. ), Mr. Morphy began his business career with California Portland Cement Co. and rose to be its president. His interest in horse racing was life-long , as was his association with Santa Anita Race Track ( Calif. ) . His parents bought a charter box from the developers , the Strub family , and his mother went almost daily to the races. In the 1960s he was one of the first of racing's syndicated owners and , with 30 other shareholders, formed the successful Impossible Stables Inc. with horses trained by Thomas A. Pratt. Morphy is credited with introducing California trainer John W. Sadler to racing by introducing him to Pratt. Morphy also invested in Dogwood Stables, a syndication which owned part of the 1990 Preakness winner Summer Squall, now standing at stud. As president of the Oak Tree Foundation, Morphy oversaw the distribution of funds generated from charity racing days at Santa Anita. When the equestrian events of the 1984 Olympics were staged at Santa Anita , Morphy served as commissioner of equestrian sports for the Los Angeles Olympic Organizing Committee. He was survived by his wife , Allegra ; four children , Adrienne of San Francisco , Timothy and Christopher of Pasadena , and Matthew of Sun Valley , Idaho ; and eight grandchildren.