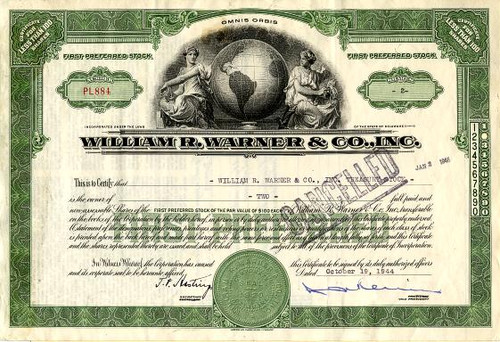 Beautiful SCARCE certificate from the William R. Warner & Co issued in 1945. This historic document was printed by American Bank Note Company and has an ornate border around it with a vignette of two allegorical women and a globe. This item has the signatures of the Company's V. President and Secretary and is over 70 years old. 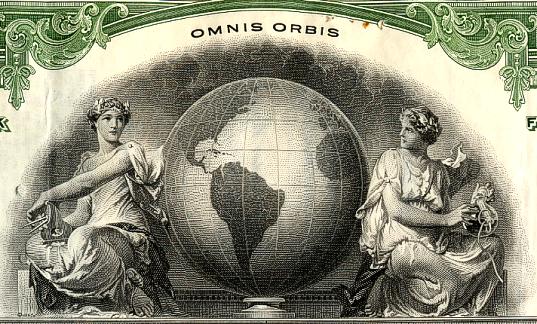 Certificate Vignette
Warner-Lambert origins can be traced to 1856 when William Warner opened a drugstore in Philadelphia. After 30 years of experimenting with the formulation of pharmaceutical products, Warner closed his retail store and began a drug manufacturing business. William Warner & Co. was acquired in 1908 by Henry and Gustavus Pfeiffer. Gustavus later wrote that "we changed thinking locally to thinking nationally." For the next 30 years the company made many acquisitions and by 1939, had 21 marketing affiliates outside the United States and several international manufacturing plants. The largest acquisition was Richard Hudnut Company, a cosmetics business, which was eventually sold in 1979. Gustavus Pfeiffer had a long and distinguished career in pharmaceutical and allied industries. At one time, his family owned -- and he served as chairman of -- the company that would become the Warner-Lambert pharmaceutical giant. Gustavus Pfeiffer was the ninth of ten children born to Heinrich and Barbara Kluftinger Pfeiffer. He went into business with his oldest brother Henry, and also pursued similar philanthropic interests. He and his wife, Louise Foote Pfeiffer, contributed thousands of dollars to Pfeiffer Junior College, was an avid collector, a writer and philosopher, and founded the Gustavus and Louise Pfeiffer Research Foundation. G. A. and Louise Pfeiffer had one son, Max, who died as an infant. Gustavus and Louise Pfeiffer founded the foundation that bears their names in 1942. The foundation seeks the general improvement of public health through the advancement and promotion of medicine and pharmacy. Gustavus Adolphus Pfeiffer (1872-1953) 1872 - Gustavus Adolphus Pfeiffer born Cedar Falls, Iowa March 24, 1872 - Louise Foote born Parkersburg, Iowa 1916 - Gustavus Adolphus Pfeiffer became president of Richard Hudnut Company 1942 - Founded the Gustavus and Louise Pfeiffer Research Foundation Like Pfizer, Warner-Lambert traces its history back to the mid-1800s, the opportune days of a growing America. In 1856, William R. Warner launched his own drug store in Philadelphia, Pennsylvania. An innovator at heart, he invented a tablet-coating process to encase harsh-tasting medicines in sugar shells. This innovation earned Warner a place in the Smithsonian Institution. Warner gave up his retail shop in 1886. He then focused solely on drug manufacturing under the name William R. Warner & Co. Meanwhile, in the American midwest, Jordan Wheat Lambert was launching Lambert Pharmacal company in St. Louis. Lambert's main product was Listerine® antiseptic, and it was marketed only to medical professionals. Lambert soon realized that Listerine had huge consumer marketing potential. In 1914, he began to mass-market Listerine through an advertising campaign that is still a case model in business schools. Another St. Louis-based company, Pfeiffer Chemical, bought William R. Warner in 1908, kept the Warner name, and expanded the company through acquisition. The paths of Warner's company and Lambert's firm intersected in 1955, with the creation of the Warner-Lambert Pharmaceutical Company. Warner-Lambert grew through acquisition. One of the earliest came in 1962, when the company bought American Chicle Company, a New York City-based company that was among the world's largest producers of gums and mints. American Chicle's flagship brand name, Adams, was well known around the world and its products included Dentyne®, Chiclets® and Trident® gums, and Certs® and Clorets® mints. In 1965, Warner-Lambert purchased a small cough tablet company in the United Kingdom and expanded the brand known as Halls® Mentholyptus to global stature. In 1970, Warner-Lambert acquired the Schick® wet-shave product line from Eversharp. The company was founded in 1929 by Jacob Schick, whose magazine-loading razor was inspired by the repeating rifle. 1970 also saw the deal that transformed Warner-Lambert: the acquisition of Parke-Davis, once the world's largest drugmaker. Parke-Davis traces its history back to 1866, when Hervey Parke and George Davis formed a small company in Detroit, Michigan. They pioneered the standardization of medications and built the first modern pharmaceutical laboratory. They also developed the first organized, systematic method of clinically testing new drugs. In the first half of the 20th Century, Parke-Davis introduced a number of breakthrough products, including the first bacterial vaccine, a pure form of adrenaline, and Dilantin® (phenytoin), the first widely available treatment for epilepsy and seizure. Dilantin® remains a valuable therapy against convulsions. After World War II, Parke-Davis popularized a number of anti-infectives, developed the Salk polio vaccine for widespread use, and introduced a new line of oral contraceptives. In 1976, the acquisition of Parke-Davis was approved by the United States Government and in the mid-1980s, Warner-Lambert refocused on three main businesses: prescription pharmaceuticals, consumer health care products, and gums and mints. The company grew with the introduction, in the early 1980s, of the first effective cholesterol-lowering agent, Lopid. In 1993, Warner-Lambert acquired Wilkinson Sword, combining it with Schick® to create the world's second largest wet-shave business. However, a far greater expansion of the company came in 1996, when Warner-Lambert entered into a co-marketing agreement with Pfizer on Lipitor® (atorvastatin calcium), a new entry into the statin class of lipid-lowering agents. Discovered by Parke-Davis Research and introduced in 1997, Lipitor® is the largest-selling pharmaceutical of any kind worldwide. In 1999, Warner-Lambert acquired Agouron, based in La Jolla, California. Agouron is a leader in protein-based drug design and marketer of the protease inhibitor, Viracept® (nelfinavir mesylate). Pfizer and Warner-Lambert announced their intention to join, a transaction completed in June 2000, creating the world's most valuable and fastest-growing pharmaceutical company. History from Wikipeida, Pfizer press information and OldCompanyResearch