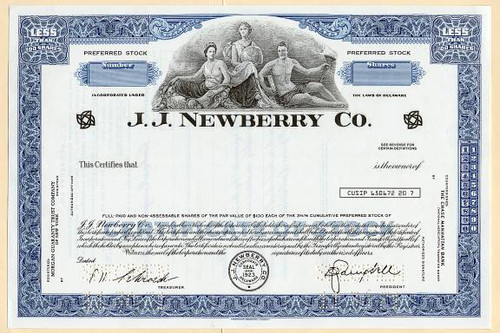 Beautifully engraved specimen certificate from the J. J. Newberry Co. This historic document was printed by the Federated Banknote Company and has an ornate border around it with a vignette of two women and a man. This item has the signatures of the Company's President, and Treasurer.

Certificate Vignette
J.J. Newberry's was an American five and dime store chain in the twentieth century. It was founded in Stroudsburg, Pennsylvania, USA in 1911 by John Josiah Newberry (September 26, 1877 - March 6, 1954). J.J. Newberry had learned the variety store business by working at S.H. Kress stores for 12 years between 1899 and 1911, after having worked for department store Fowler, Dick, and Walker for five years. There were 7 stores in the chain by 1918. The company was a family business. J.J. Newberry was joined in management by his brothers C.T. Newberry and Edgar A. Newberry in 1919, at which time there were 17 stores with yearly sales of $500,000. Over the years, the Newberry chain acquired other stores including Hested in Wyoming, North Dakota, Colorado, and Nebraska, and Lee Stores in South Dakota, Minnesota, and Iowa. At the time of founder J.J. Newberry's death (1954), the chain had 475 stores. By 1961 the company operated 565 stores with total yearly sales of $291,000,000. The Newberry chain was ultimately purchased by McCrory Stores, and then folded slowly as McCrory's downsized and eventually entered bankruptcy. 300 stores closed in 1997, but some lingered on, with at least one closing as late as 2001. Early J.J. Newberry stores featured a recognizable logo composed of gold serif letters on a red background that usually occupied the entire width of the store. Later stores featured a cursive 1960s modern logo style, dropping the "J.J." altogether. Poet Donald Hall wrote a poem, "Beans and Franks", about the closing of a J.J. Newberry store in Franklin, New Hampshire. History from Wikipedia and OldCompany.com (old stock certificate research service).