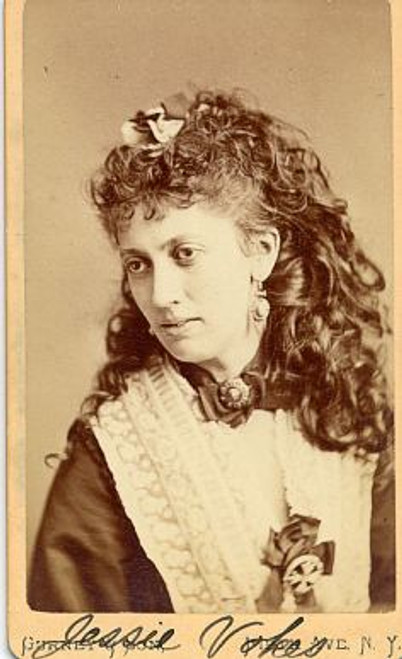 Historic Carte de Visite of Jessie Vokes by the Gurney Company. Signed Jessie Vokes on bottom. English: Jessie Vokes 1851-1884, Vokes Family, English Actress. Source Carte de Visite Woodburytype - Print. The Vokes family was a set of three sisters and one brother and a second honorary brother popular in the pantomime theatres of 1870s London and in the United States of America. They were: Fred Vokes 1846-1888 English Actor and Dancer. Jessie Vokes 1851-1884 English Actress. Victoria Vokes 1853-1894 English Actress. Rosina Vokes 1854-1894 English Actress. Fawdon Vokes born Walter Fawdon 1844-1904 English Actor. The following is from "A dictionary of the drama: a guide to the plays, play-wrights, players by William Davenport Adams - 1904": VOKES, JESSIE, born in London, was educated to the stage from childhood. At the age of four she first appeared at the Surrey Theatre, and subsequently played there a round of juvenile characters. From time to time during the first period of her professional career she performed the following parts, viz. Teddy in ' Dred,' with Mr. Creswick in the leading rduj Florence in ' The Dumb Savoyard,' with Mr. Flexmore ; Mamillius in 'A Winter's Tale' (at Sadler's Wells), with Mr. S. Phelps; Tyoe in ' The Pirates of Savannah,' with Mr. Charles Mathews ; Prince Arthur in ' King John,' with Messrs. Phelps and Creswick ; Prince of Wales in ' Richard III.,' with Mr. Barry Sullivan. Her first laurels were won as one of the children in ' Masks and Faces,' in which character she and her sister danced a jig with Mr. Benjamin Webster and the late Mrs. R. Honner, during a performance of that play at the Standard Theatre. In 1861 she started her career with her brothers and sisters as " The Vokes Children "(subsequently changed to " The Vokes Family ") at the Operetta House in Edinburgh. The success of that combination is now so well known, and has been so widely circulated, that it is unnecessary to enumerate in detail its history during a period now extending over ten years. "The Vokes Family " made their debut in London at the Lyceum Theatre, December 26, 1868, in the pantomime of Humpty Dumpty.' The travels of the " family " have taken them over half the world. The Vokes's have crossed the Atlantic ten times, and the Rocky Mountains twice, have sojourned among the Mormons in Salt Lake City for a month, have passed through the great Yosemite Valley, and have viewed the Pacific Ocean from the bold headlands sheltering the Bay of San Francisco. They have played in every city of importance in Great Britain, Ireland, the United States, and Canada. Miss Jessie Vokes had the advantage of Mr. Creswick's instruction and friendship in educating her in the business of the stage, and of the late Mr. Flexmore's teaching in the art of dancing. The most successful on the whole of the pieces in which the Vokcs Family have appeared has been ' The Belles of the Kitchen.' (See also, Frederick and Victoria Vokes.)