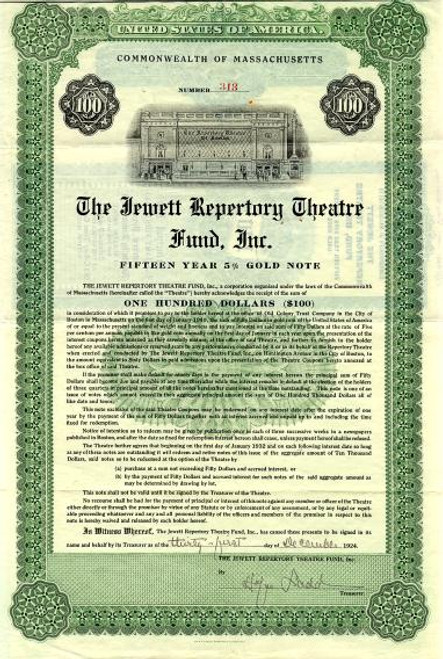 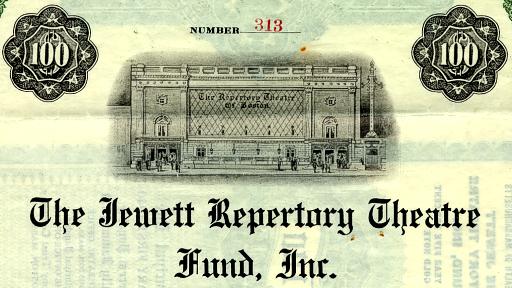 Certificate Vignette
The Repertory Theatre of Boston complex was built in the mid-1920s to accommodate a troupe called the Henry Jewett Players, America's first resident professional theater company. An Australian-born actor and director best known as Julia Marlowe's leading man, Henry Jewett mustered his players shortly after the turn of the century and began staging Shakespeare at the Boston Opera House. He moved them to a facility called the Copley Theatre in 1916, and seven years later established the Jewett Repertory Fund, which enabled construction of what was to be his company's permanent home. In choosing the Huntington Avenue site, he deliberately placed his theater in the thick of Boston's cultural landmarks -- Symphony Hall, the Museum of Fine Arts, the Opera House. The city seemed to embrace Jewett's project. Sponsors of the fund included such prominent Brahmins as A. Lawrence Lowell, president of Harvard University, and U.S. President Calvin Coolidge. The theater opened with a production of Richard Brinsley Sheridan's The Rivals on November 10, 1925. But despite its auspicious beginning and tax-exempt status, the company couldn't stay in the black for very long. The reasons for its failure remain hazy. One hard-to-substantiate story involves Mrs. Jewett's absconding with the business manager and all the money. To be certain, the Jewett faced competition from commercial playhouses in the Boylston/Tremont district, and from a new form of entertainment, the talkie. When the theater closed in 1930, it was converted into a movie house. Jewett himself died the same year. Boston University has owned the block of buildings (Repertory Theatre of Boston) that now houses the Huntington Theatre Company, stretching from 252 to 264 Huntington Ave., since 1953. History from Boston University.