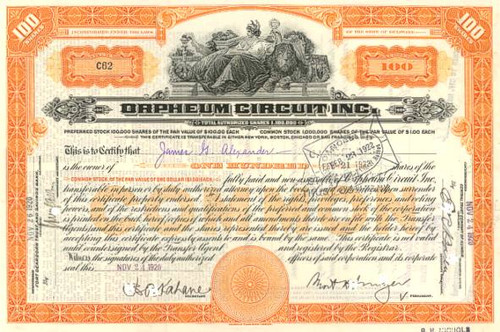 Beautifully engraved Certificate from the Orpheum Theatre Circuit issued in 1920 - 1924. This historic document was printed by the American Banknote Company and has an ornate border around it with a vignette of sitting next to a friendly lion. This item has the printed signatures of the company's officers and is over 96 years old. 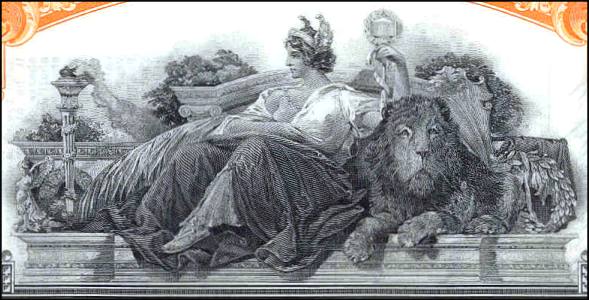 Certificate Vignette
Orpheum audiences have seen an illustrious array of American theatrical entertainment pass across its stage and screen. From vaudeville, to movies, to musical comedy, every major city in North America had a historical Orpheum theatre. This historical certificate has an ornate border around it with a vignette of an allegorical woman sitting next to a large lion. In the twenties, the entertainment rage was vaudeville, and movies merely an added attraction to intrigue the patrons. The theatres themselves were architectural flights of fancy Egyptian palaces, Indian temples, medieval castles with open courtyards. Most of the architecture was exaggerated and opulent. But these setting added to the romance and adventure the audience would find on-stage. Many of the Orpheum Theatres were originally associated with the Keith Albee Orpheum vaudeville circuit, or, later, the Radio Keith Orpheum (also known as RKO, creators of King Kong and other classic films) company. The name seems to have been the most popular during the vaudeville era, although the name first appeared in the 1870s. The theatre group was named after Orpheus who was the son of one of the Muses and a Thracian prince [ some stories say he the son of Morpheus and Calliope, but that's another kettle of fish.] He was an irresistible musician and poet. He is also considered to be the founder of Orphism, an ancient Greek cult that stressed the transmigration of souls, moral and ritual purity, and individual responsibility for guilt. The cult had some mystical rites of initiation and purification, as well.