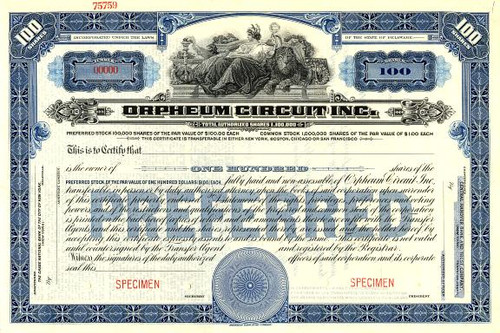 Beautifully engraved specimen certificate from Orpheum Circuit Inc dated 1919. This historic document was printed by American Bank Note Company and has an ornate border around it with a vignette of a woman lying next to a lion. This item and is over 86 years old. 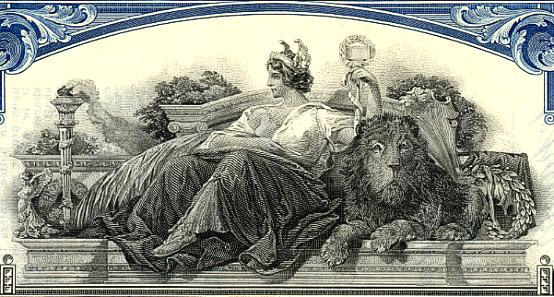 Certificate Vignette
History from Old Company Research - OldCompany.com: ORPHEUM CIRCUIT INC. History: Incorporated Dec. 22, 1919, under the laws of the State of Delaware with perpetual charter. Organized generally to carry on the theatrical and amusement business, and in accordance with the terms of its charter may present all types of public entertainment and is authorized to operate and maintain amusement enterprises of all kinds. It was organized primarily as a holding company to acquire, and did acquire, by the issue of 549,170 shares of its common stock and 58,800 shares of its preferred stock in exchange therefor, all or substantially all of the capital stock of 45 vaudeville theatres located in 36 cities throughout the United States and Canada and a large interest in two vaudeville circuits now operated by the Orpheum Circuit Inc. Also owns 6,004 shares (par $100) of the 13,890 shares outstanding of B. F. Keith New York Theatres Co. . Management: OFFICERS: Martin Beck, Chairman; Marcus Heiman, Pres.; J. M. Finn, M. H. Singer and Mrs. C. L. Kohl, Vice-Pres.; B. B. Kahane, Sec. and Treas. DIRECTORS: Martin Beck, Marcus Heiman, M. H. Singer, B. B. Kahane, F. W. Vincent, Mrs. C. L. Kohl, J. M. Finn, Herman Fehr, D. W. Gurnett, J. G. Alexander, F. R. Tate, S. Lansburgh, G. A. Trude, L. C. Brown, Sanford Sachs. ANNUAL MEETING: Second Tuesday in March at Wilmington, Del. EXECUTIVE OFFICE: Salt Lake Bldg., Chicago, Ill. About Specimens Specimen Certificates are actual certificates that have never been issued. They were usually kept by the printers in their permanent archives as their only example of a particular certificate. Sometimes you will see a hand stamp on the certificate that says "Do not remove from file". Specimens were also used to show prospective clients different types of certificate designs that were available. Specimen certificates are usually much scarcer than issued certificates. In fact, many times they are the only way to get a certificate for a particular company because the issued certificates were redeemed and destroyed. In a few instances, Specimen certificates we made for a company but were never used because a different design was chosen by the company. These certificates are normally stamped "Specimen" or they have small holes spelling the word specimen. Most of the time they don't have a serial number, or they have a serial number of 00000. This is an exciting sector of the hobby that grown in popularity over the past several years.