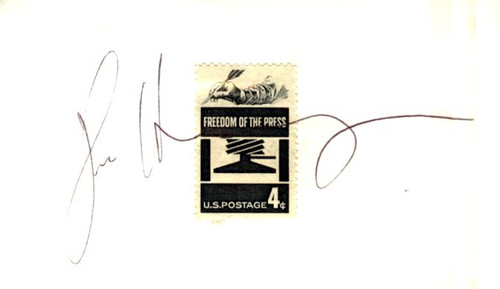 John Hockenberry's autograph on a 3" x 5" card on a Freedom of the Press 4 Cent U.S. Postage Stamp. John Charles Hockenberry (born June 4, 1956) is an American journalist and author. A four-time Emmy Award winner and three-time Peabody Award winner, Hockenberry has worked in media since 1980. Hockenberry has reported from all over the world, has anchored programs for network TV, cable, and radio, and has reported for magazines, newspapers, and online media. He is a prominent figure in the disability rights movement; Hockenberry sustained a spinal cord injury in a car crash at the age of 19, which left him with paraplegia from the chest down. In 2007, he was named a Distinguished Fellow at the MIT Media Lab. Since April 2008, Hockenberry has been host of The Takeaway, a live national morning news program created by Public Radio International and WNYC New York. He is author of the nonfiction book Moving Violations: War Zones, Wheelchairs and Declarations of Independence and the novel A River Out Of Eden. History from Wikipedia and OldCompany.com (old stock certificate research service)