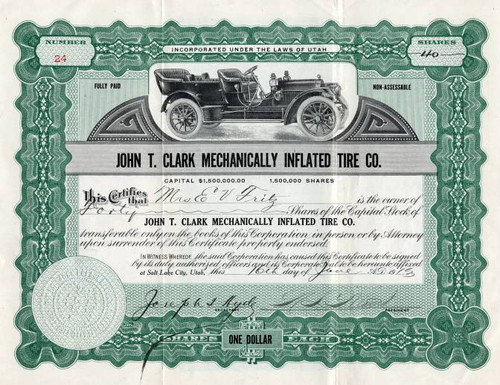 Beautiful certificate from the John T. Clark Mechanically Inflated Tire Company issued in 1913. This historic document has an ornate border around it with a vignette of an early car. This item has the original signatures of the Company's President, and Secretary, and is over 99 years old.

Certificate Vignette
John T. Clark: The "One Mighty and Strong" Brian C. Hales This article examines John T. Clark, a relatively little-known but influential figure in the rise of fundamentalism among the Latter-day Saints during the early twentieth century. By 1921, small groups of excommunicated polygamists had begun to congregate at homes, offices, industrial buildings, and even in open-air settings. While no identifiable leaders would emerge until the 1930s, these groups would eventually coalesce to form the fundamentalist movement. Several individuals, including Clark, became prominent within the informal gatherings, either because of their testimonies, convictions, publications, financial successes, or claims to priesthood authority. Clark is unusual, however, because he was apparently never a polygamist. Rather, it was his doctrinal unorthodoxy and creative theological speculations that distanced him from the official LDS Church and made him an appealing figure to others whose ideas included the continuation of post-Manifesto polygamy. John Tanner Clark left no personal papers, diaries, or autobiography, to my knowledge, so biographical background is sparse. He was born January 4, 1865, in Provo, Utah, to John Clark and Alvira Jane Pratt Clark and raised in the LDS Church. He served a three-year mission on the Uintah Indian reservation and was apparently, for a time, a member of the BYU faculty, although no details seem to be available about his education, field, or the period of this employment. He married Alice Scow in 1896 in the Salt Lake Temple. However, they had no children, she died in 1898, and Clark apparently never remarried. Intellectually keen, he served in World War I, developing a shield for ships that would explode a torpedo before it made contact with the John T. Clark invented a puncture-proof automobile tire and a special rim. He formed the John T. Clark Mechanically Inflated Tire Company in 1913. History from Wikipedia and OldCompany.com (old stock certificate research service)