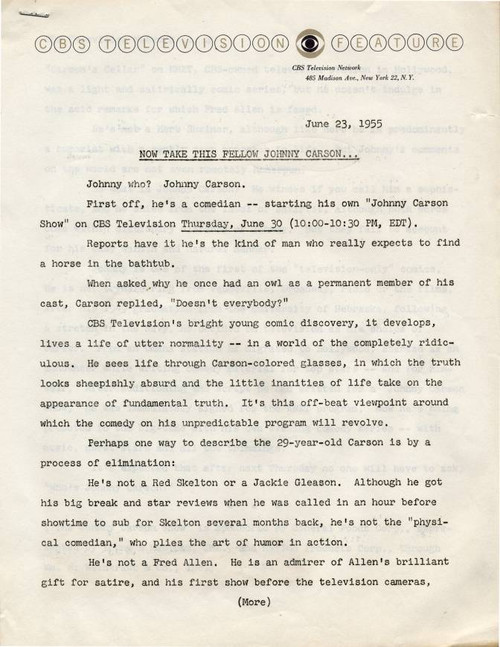 Original press release from the CBS Television dated June 23, 1955 announcing the Johnny Carson Show. This historic document has CBS Television logo on top and is over 58 years old. 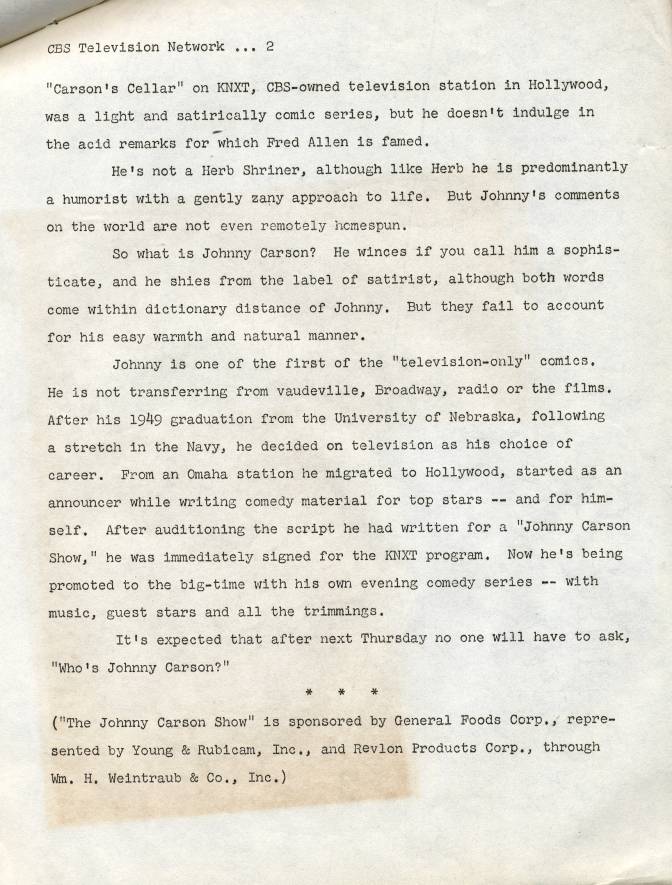 Page 2
The Johnny Carson Show Original run June 30, 1955 March 29, 1956 The Johnny Carson Show was a 1955-56 half hour prime time television variety show starring Johnny Carson. While working as a staff writer on The Red Skelton Show, local Los Angeles television comedian Johnny Carson filled in as host when Skelton was injured during a show rehearsal. As a result of Carson's performance, CBS created the primetime variety program The Johnny Carson Show, a traditional potpourri of comedy, music, dance, skits and monologues. It aired on Thursday nights at 10pm ET. The short-lived 1955-56 series served as a precursor of what would come later for Carson, planting the seeds for sketches he would perform on the later The Tonight Show Starring Johnny Carson such as "Mighty Carson Art Players". However, the show flopped in the ratings and was quickly cancelled. This show was produced in Los Angeles at CBS Television City. The show was alternately sponsored by Revlon, and General Foods (Jell-O, instant Sanka, and Minute Rice In a 1978 profile of Carson in The New Yorker, Kenneth Tynan described the Johnny Carson Show as "a half-hour program that goes through seven directors, eight writers, and thirty-nine weeks of worsening health before expiring, in the spring of 1956." Carson wound up hosting a daytime game show called Who Do You Trust? (195762) until he was tapped by NBC to replace the departing Jack Paar as host of The Tonight Show in 1962. Kinescopes of ten episodes from the series were discovered in a closet by Carson's second wife Joanne and released by Shout Factory on DVD in 2007. Joanne Carson says the kinescopes were hand-picked by Carson as a courtship gift to her and featured his favorite episodes from the series. Additional episodes survive at the UCLA Film and Television Archive. History from Wikipedia and OldCompany.com (old stock certificate research service)