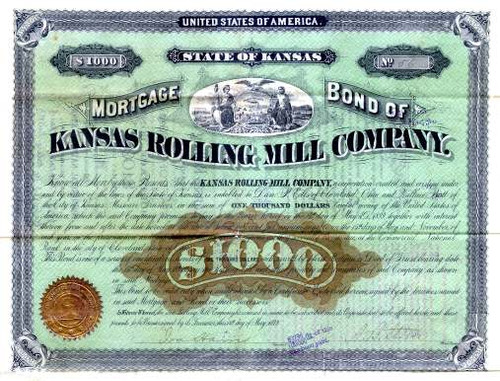 Beautifully engraved SCARCE certificate from the Kansas Rolling Mill Company issued in 1879. This historic document has an ornate border around it with a vignette of two allegorical woman and an eagle. There are also over 25 unused coupons attached on the bottom. This item is hand signed by the company's president (A. B. Stone) and treasurer (Ira Harris) and is over 130 years old. The certificate was also signed by the Trustees of Dan P. Eells (Cleveland, Ohio) and Wallace Pratt (Kansas City, Missouri). Dan Parmelee Eells was President of the Commercial National Bank of Cleveland from 1868 to 1897. He was also on the Board of many other companies. The Kansas Rolling Company was established in Rosedale, Kansas in the year 1875; what little machinery then constituted the mills was brought there from Decatur, Ill. The company had been constantly making additions to their works until their capacity was something marvelous for so young an institution in such a small young city. The mills employed 500 men and manufactured nearly every variety of railroad supplies, including iron rails, and anything that can be thought of in the way of miners; tools and equipments. They also made a specialty of harrow teeth, girder plates and many articles of builders' supplies. The engines aggregated 500 horse-power, and together with the furnaces consume twelve car loads of coal per day. The capacity of these mills enables them to manufacture each week 500 tons of rails; 33,000 splice bars; 270,000 pounds of spikes, and 80,000 pounds of bolts. Their cooper shop on the premises, for the manufacture of kegs for spikes, turns out 500 kegs daily. The company's officers were A. B. Stone, President; Ira Harris, Vice President and General Manager: Edward V. Wilkes, Secretary and Treasurer; and D. S. Mathias, Superintendent. They had about ten tenement houses in the town occupied by employes. A forging shop is connected with the mills, in which is operated a 700 pound steam hammer. Their monthly payroll varied from $10,000 to $25,000, and skilled workmen who work by the piece realized big wages. These mills manufactured during the year ending July 1, 13,000 tons of rails; 5,200 tons of splice bars; 4,500 tons of spikes; 4 000 tons of miscellaneous goods. The above information was obtained from the History of Kansas website at http://listproc.cc.ukans.edu/~hisite/kancoll/books/cutler/wyandotte/wyandotte-co-p16.html. (William G. Cutler's History of the State of Kansas) In 1911, the following was printed by The Lewis publishing company: The buildings of the Kansas Rolling Mill Company, which once occupied all the Turkey Creek valley near where Kansas City avenue now turns to the west, have disappeared one by one. The old mill once employed 1,500 men. It was built in 1875 for the purpose of working over old railroad iron. The village grew up around it. There were no street-car lines then to hurry the people of Rosedale to the business section of a big city nearby, and it was an up-hill drive to Westport, the closest place. So the rolling mill company had its store. The mill used to be one of the sights, and parties would drive out to see the redhot rails re-rolled. The railroads used iron rails in those days, and as they were worn down new ones were made by working old ones over. The mill also made stoves and other articles of iron in common use. The mill proper closed in 1883, as a result of legal disputes among the members of the company. The old buildings stood idle for some time. Then part of them were torn down and others were moved across the tracks of the railway yards, and re-opened by the Kansas City Wire and Iron Works. The property has now been taken over by the Illinois Steel Company, which held a mortgage on the wire and iron works. The machinery has been sent to St. Louis. The old building is to be torn down and the ground fenced up.