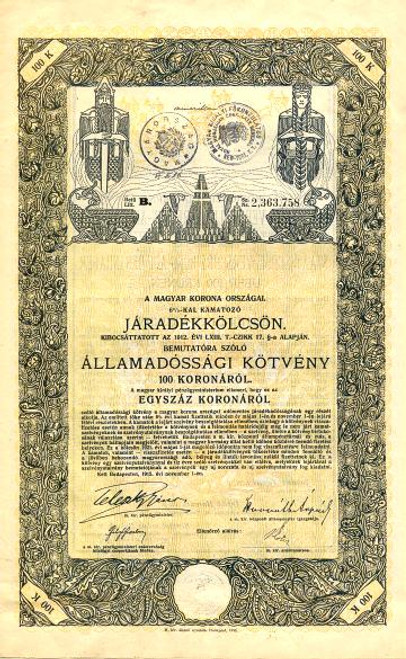 Beautifully engraved certificate from the Kingdom of Hungary issued in 1915. This historic document was printed by M.kir allami nyomda, Budapest and has an ornate border around it with a vignette of a drawing of a King and Queen with soldiers in the background. This item has the signatures of Hungarian Officials and is over 91 years old. The bond is written in Hungarian, French and English. The certificate is hand stamped by the Royal Hungarian Consulate General, New York. 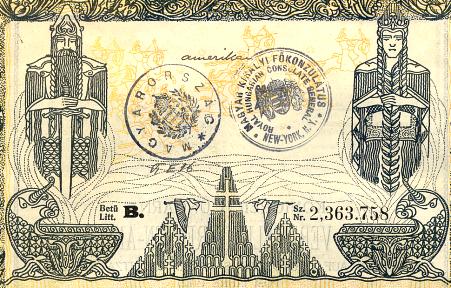 Certificate Vignette
Bond description on certificate. KINGDOM OF HUNGARY BONDS BEARING INTEREST AT 6% ISSUED IN VIRTUE OF THE § 17 OF THE LAW LXIII OF THE YEAR 1912. STATE-BOND TO BEARER FOR 100 CROWNS. The Royal Hungarian Ministry of Finance declares that this Bond for ONE HUNDRED CROWNS forms part of the annuity-debt of the Kingdom of Hungary, exempt from all taxes. This Bond bears interest at the rate of 6% per annum, payable halfyearly on the 1st May and 15th November of each year. The holder will on delivery of the coupon receive the interest, I and in case of redemption of the bond he will also, on delivery of the bond, of all the coupons not yet due at the term of recall and of the talon, receive the principal at his option, either in Budapest at the Royal Hungarian State Central-Treasury or at other pay-offices indicated on the back of the coupons or at such to be made public in due time by the Hungarian Government. No notice will be given for reimbursement of the present loan for any term previous to the Pt May 1921. The interest as well as the principal of the bonds, when redeemed, will be paid without deduction of any existing or future Hungarian duties, stamps and taxes. This Bond is provided with a talon and coupons for ten years, at the expiration of which the bearer of the talon will receive on delivery of the same a fresh coupon-sheet with another talon. Budapest, the 1st November 1915. John Telessky, m. p. Royal Hungarian Minister of Finance. Arpad Horveith, m. p. Director of Royal Hungarian State Central-Treasury. Bartholomew Balogh m. p. Royal Hungarian Chief Accountant On June 28, 1914, a Bosnian Serb assassinated Archduke Franz Ferdinand, heir to the Austrian throne. Within days AustriaHungary presented Serbia with an ultimatum that made war inevitable. Tisza initially opposed the ultimatum but changed his mind when Germany supported Austria-Hungary. By late August, all the great European powers were at war. Bands playing military music and patriotic demonstrators expecting a quick, easy victory took to Budapest's streets after the declaration of war. However, Hungary, was ill prepared to fight. The country's armaments were obsolete, and its industries were not prepared for a war economy. In 1915 and 1916, Hungary felt the full impact of the war. Inflation ran rampant, wages were frozen, food shortages developed, and the government banned export of grain even to Austria. Franz Joseph died in 1916, and Karl IV (1916-18) became Hungary's new king. Before being crowned, however, Karl insisted that Hungarians has expanded voting rights. Tisza resigned in response. By 1917 the Hungarian government was slowly losing domestic control in the face of mounting popular dissatisfaction caused by the war. Of the 3.6 million soldiers Hungary sent to war, 2.1 million became casualties. By late 1918, Hungary's farms and factories were producing only half of what they did in 1913, and the war-weary people had abandoned hope of victory. On October 31, 1918, smoldering unrest burst into revolution in Budapest, and roving soldiers assassinated Istvan Tisza. Pressured by the popular uprising and the refusal of Hungarian troops to quell disturbances, King Karl was compelled to appoint the "Red Count," Mihaly Karolyi, a pro-Entente liberal and leader of the Party of Independence, to the post of prime minister. Chrysanthemum-waving crowds poured into the streets shouting their approval. Karolyi formed a new cabinet, whose members were drawn from the new National Council, composed of representatives of the Party of Independence, the Social Democratic Party, and a group of bourgeoisie radicals. After suing for a separate peace, the new government dissolved the parliament, pronounced Hungary an independent republic with Karolyi as provisional president, and proclaimed universal suffrage and freedom of the press and assembly. The government launched preparations for land reform and promised elections, but neither goal was carried out. On November 13, 1918, Karl IV surrendered his powers as king of Hungary; however, he did not abdicate, a technicality that made a return to the throne possible. The Karolyi government's measures failed to stem popular discontent, especially when the Entente powers began distributing slices of Hungary's traditional territory to Romania, Yugoslavia, and Czechoslovakia. The new government and its supporters had pinned their hopes for maintaining Hungary's territorial integrity on abandoning Austria and Germany, securing a separate peace, and exploiting Karolyi's close connections in France. The Entente, however, chose to consider Hungary a partner in the defeated Dual Monarchy and dashed the Hungarians' hopes with the delivery of each new diplomatic note demanding surrender of more land. On March 19, 1919, the French head of the Entente mission in Budapest handed Karolyi a note delineating final postwar boundaries, which were unacceptable to all Hungarians. Karolyi resigned and turned power over to a coalition of Social Democrats and communists, who promised that Soviet Russia would help Hungary restore its original borders. Although the Social Democrats held a majority in the coalition, the communists under Bela Kun immediately seized control and announced the establishment of the Hungarian Soviet Republic. History from the Libary of Congress.