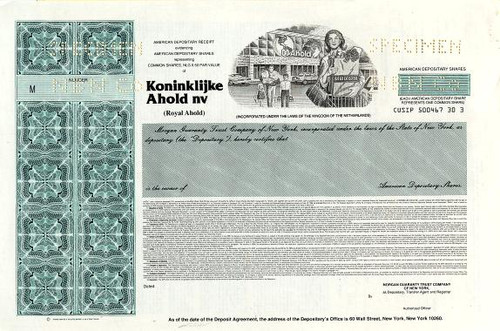 Beautiful engraved specimen certificate from the Koninklijke Ahold nv. This historic document was printed by Northern Banknote Company and has an ornate border around it with a vignette of a family leaving a grocery store. 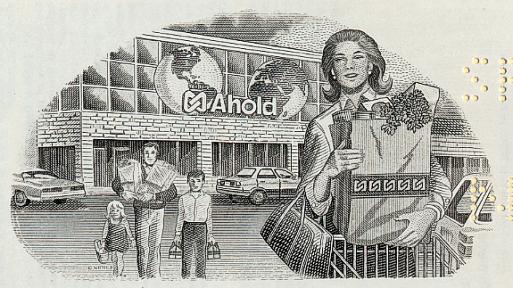 Certificate Vignette
Dutch supermarket group Ahold is the world's third-largest retailer that stunned financial markets last month when it disclosed a $500 million overstatement of profits at its U.S. Foodservice unit. Ahold, the world's number three retailer rocked by an accounting scandal, will erase $30 billion in reported sales when it corrects the way it accounts for joint ventures. In the United States, Ahold has food retail, foodservice and e-commerce activities. Ahold operates over 1,600 stores grouped in six retail operating companies along the eastern seaboard under the regional brand names of Stop & Shop, Giant (Carlisle), Giant (Landover), Tops, BI-LO and Bruno's. Ahold's wholly owned subsidiary U.S. Foodservice, the second largest foodservice distributor in the U.S., can potentially meet the foodservice needs of approximately 95% of the American population. Ahold also operates Peapod, a leading U.S. internet grocer. In Europe, Ahold operates close to 7,000 stores in 13 countries. In the Netherlands, Ahold operates over 2,300 stores, including supermarket leader Albert Heijn and specialty stores Gall & Gall, Etos, De Tuinen and Jamin. Together with Deli XL, Ahold's wholly owned foodservice operator in the Netherlands and Belgium, these companies also operate the joint internet-based home delivery service Albert. Ahold holds a 73% interest in Schuitema, a wholesale supplier to the affiliated C1000 supermarket operators. In Northern Europe, Ahold has a 50/50 joint venture comprising almost 3,000 stores with the ICA Group, Scandinavia's largest food retailer, in Sweden, Norway, Denmark, Latvia, Lithuania and Estonia. Ahold also has foodservice activities in Sweden through the jointly owned ICA MenyfÃ¶retagen. In Southern and Central Europe, Ahold operates over 1,150 stores. In Spain, Ahold operates over 620 Supersol supermarkets and Hipersol hypermarkets on the Spanish mainland, and Hiperdino hypermarkets on the Canary Islands. In Portugal, Ahold co-owns approximately 200 Pingo Doce supermarkets and Feira Nova hypermarkets. In Poland, Ahold owns over 165 Albert supermarkets and Hypernova hypermarkets. In the Czech Republic, Ahold owns more than 200 Albert supermarkets and Hypernova hypermarkets. Operations under the Hypernova banner in neighboring Slovakia were started at the end of 2001. In Latin America, Ahold is active in 10 countries with approximately 750 stores. In Brazil, Ahold is the owner of BompreÃ§o, the leading food retailer in the northeast of the country with over 100 supermarkets and hypermarkets, and G. Barbosa, a chain of 32 hypermarkets and supermarkets in northeastern Brazil. In Argentina, Ahold owns more than 235 Disco supermarkets, and in Chile, Peru and Paraguay operates more than 110 Santa Isabel supermarkets. In Central America, Ahold has a joint venture, named CARHCO, with La Fragua and CSU which operates more than 275 stores in Guatemala, Costa Rica, Honduras, El Salvador and Nicaragua. In Asia, Ahold is developing the TOPS supermarket format in Thailand, Malaysia and Indonesia with almost 100 supermarkets. About Specimens Specimen Certificates are actual certificates that have never been issued. They were usually kept by the printers in their permanent archives as their only example of a particular certificate. Sometimes you will see a hand stamp on the certificate that says "Do not remove from file". Specimens were also used to show prospective clients different types of certificate designs that were available. Specimen certificates are usually much scarcer than issued certificates. In fact, many times they are the only way to get a certificate for a particular company because the issued certificates were redeemed and destroyed. In a few instances, Specimen certificates we made for a company but were never used because a different design was chosen by the company. These certificates are normally stamped "Specimen" or they have small holes spelling the word specimen. Most of the time they don't have a serial number, or they have a serial number of 00000. This is an exciting sector of the hobby that grown in popularity over the past several years.