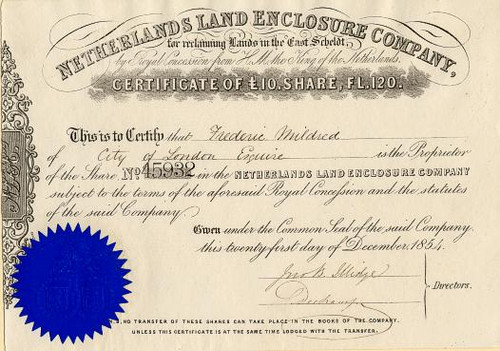 Beautiful certificate from the Netherlands Land Enclosure Company issued in 1854. This historic has an ornate border and has the signatures of the Company's Director's including Jacob Illidge and is over 153 years old. Blue embossed corporate seal attached to face. Issued to Frederic Mildred. The company was in business for Reclaiming (Improving) Lands in the East Scheldt. The Scheldt is a 350 km long river in northern France, western Belgium and the southwestern part of the Netherlands. The Scheldt finds its origin in Gouy, in the Aisne department, northern France. It flows north through Cambrai and Valenciennes, and enters Belgium near Tournai. In Ghent, where it receives the Lys, its main tributary, the Scheldt turns east. Near Antwerp, the largest city on its banks, the Scheldt flows west into the Netherlands towards the North Sea. Originally there were two branches from that point: the Oosterschelde (Eastern Scheldt) and the Westerschelde (Western Scheldt) but in the 19th century the river was cut off from its eastern (actually: northern) branch by a dike that connects Zuid-Beveland with the mainland (North Brabant). Today the river therefore continues into the Westerschelde estuary only, passing Terneuzen to reach the North Sea between Breskens in Zeeuws-Vlaanderen and Vlissingen (Flushing) on Walcheren. The Scheldt is an important waterway, and has been made navigable from its mouth up to Cambrai. Several canals (including the Albert Canal) connect the Scheldt with the basins of the Rhine, Meuse and Seine, and with the industrial areas around Brussels, LiÃ¨ge, Lille, Dunkirk and Mons. The Scheldt flows through the following departments of France, provinces of Belgium, provinces of the Netherlands and towns: Aisne (F): Gouy Nord (F): Cambrai, Denain, Valenciennes Hainaut (B): Tournai West Flanders (B): Avelgem East Flanders (B): Oudenaarde, Ghent, Dendermonde, Temse Antwerp (B): Antwerp Zeeland (NL): Terneuzen, Flushing The Scheldt estuary has always had considerable commercial and strategic importance. In Roman days it was important for the shipping lanes to Britannia. The Franks took control over the region around 260 and at first interfered with the Roman supply routes as pirates. Later they became allies of the Romans. With the various divisions of the Frankish Empire in the 9th century, the Scheldt eventually became the border between the West and the East Empire, later named France and the Holy Roman Empire. This situation remained -- at least on paper -- till 1528, although by then both Flanders on the left bank and Zeeland and Brabant on the right were part of the Habsburg possessions of the Seventeen Provinces. Antwerp was the most prominent harbor of Western Europe. After this city fell back under Spanish control in 1585 the Dutch Republic took control of Zeeuws-Vlaanderen, a strip of land on the left shore and closed the Scheldt for shipping. This shifted the trade to Amsterdam. In the time of the French Revolution the river was reopened in 1792 and once Belgium in 1830 had claimed its independence from The Netherlands the treaty of the Scheldt determined that the river should remain accessible to ships headed for Belgian ports. In World War II the estuary once again became a contested area. Despite allied control of Antwerp, in September 1944 German forces still occupied fortified positions throughout the Scheldt estuary west and north, preventing any allied shipping to the port. In the Battle of the Scheldt, the Canadian First Army successfully cleared the area, allowing supply convoys direct access to the port of Antwerp by November of 1944.