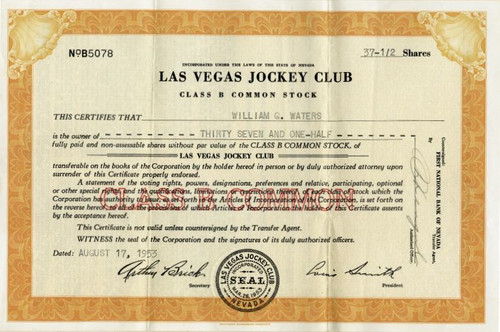 Beautifully engraved certificate from the Las Vegas Jockey Club 1953. This historic document was printed by Security Banknote Company and has an ornate border around it with the company's name on top center. This item has the printed signatures of the Company's President and Secretary and is over 61 years old. This is only the second time we have had this certificate for sale. The city of Las Vegas will be celebrating its 106th anniversary later this year. NASCAR, meanwhile, has its own Vegas anniversary. Over 50 years ago, on Oct. 16, 1955, a 200-mile event, the 43rd race on the NASCAR schedule, was held at the Las Vegas Park Speedway. The track was originally built as the Las Vegas Jockey Club horse track. Only three motor sports events were held at the mile-long dirt track before it was razed to make way for the Las Vegas Hilton: An IndyCar championship race in 1954, a USAC stock car race in 1959 and the NASCAR event of 1955. A field of 27 cars took the green flag. The race was called due to darkness after 111 miles. Norm Nelson, driving one of Carl Kiekhaefer's powerful Chrysler 300s, captured the pole with a speed of 74.518 mph and went on to win the race in only his second NASCAR start. Nelson averaged a speed of 44.449 mph for the race and won by a margin of two laps over runner-up, Bill Hyde. This race was Nelson's only NASCAR pole and only NASCAR win, although he had great success with other sanctioning bodies. Among the notables in the field that day were Johnny Mantz, winner of the inaugural Southern 500 in 1950, and West Coast stars Danny Letner, Lloyd Dane, Bill Amick and Eddie Pagan.