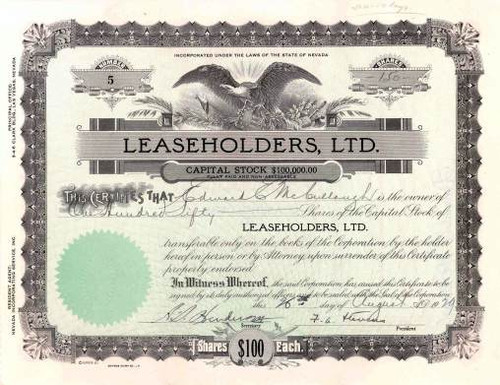 Beautifully engraved certificate from the Leaseholders, Ltd. issued in 1929. This historic document has an ornate border around it with a vignette of an eagle with a shield. This item is hand signed by the Company's President ( F. A. Stevens ) and Secretary and is over 84 years old. The certificate was issued to Edward E McCullough's and endorsed by him on the verso. 1931 was an eventful year in Las Vegas, Nevada. Gambling had just been legalized by the Nevada Legislature, and Las Vegas merchants were clamoring for gaming licenses. Among those who applied were three men who had leased the dance hall, restaurant and fountain concession the year before. They applied for a license to run a crap game but were rejected, setting the stage for the first court case under the new law. At issue was whether the city had authority to arbitrarily issue or deny the coveted licenses. On behalf of the three Lorenzi lessees, attorney Charles L. Horsey filed a writ of mandamus with the Nevada Supreme Court, demanding the license be granted. The court listened to arguments from Las Vegas City Attorney F.A. Stevens before ruling that the city could indeed deny the license. Having won its fight, the City Commission reversed itself and issued a license for Lorenzi's Resort. The Monte Carlo Casino operated for one month, then let its license lapse. Though the resort was David Lorenzi's pride and joy, it was barely a break-even enterprise. He wanted his property to become a public park, and in 1936 offered it to the city for $70,000. The city fathers pleaded poverty, and declined the offer. But the city paid $750,000 for it in 1965.