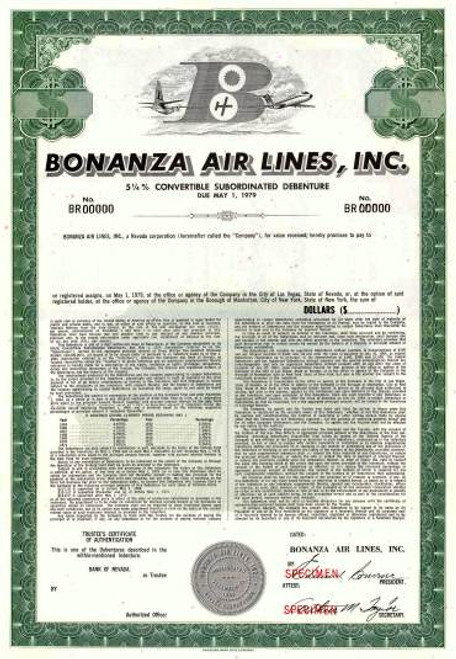 Beautifully engraved RARE SPECIMEN certificate from the Bonanza Air Lines, Inc. This historic document was printed by the American Banknote Company in 1964 and has an ornate border around it with a vignette of the company logo with planes flying around it. This item has the printed signatures of the Company's President and founder ( Edmund Converse ) and is over 53 years old. This is the first time we have seen a certificate from Bonanza Air lines.

Certificate Vignette
Bonanza Air Lines was founded in early in 1945 by Edmund Converse as a flying charter services out of Las Vegas. In 1946, the airline began inter-state scheduled services between Las Vegas and Phoenix. It was later expanded to cover Reno - Las Vegas and Los Angeles - Las Vegas. Bonanza were the USA's first all-turbo-prop airline. In 1967, the company merged with West Coast and Pacific Airlines which created Air West. In 1970 the airline changed its name to Hughes Airwest after a take-over by the late Howard Hughes. Hughes Airwest was acquired by Republic Air lines which was subsequently acquired by Northwest. Bonanza Air Lines was terrific airlines and will always be remembered. History from OldCompany.com and SavingsBonds.pro (collectible Savings Bonds website)