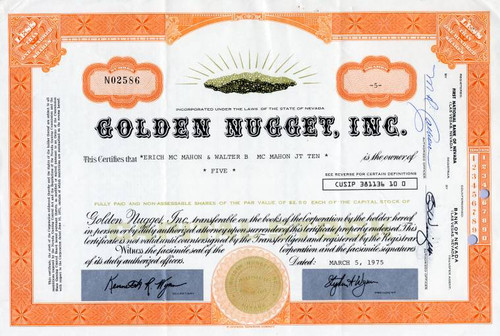 Beautiful certificate from Golden Nugget, Inc. issued in 1975. This historic document was printed by the Jeffries Banknote Company Company and has an ornate border around it with a vignette of an the company's name and a shinning golden nugget. This item has the signatures of the Company's President, Steve Wynn and Secretary, and is over 39 years old. 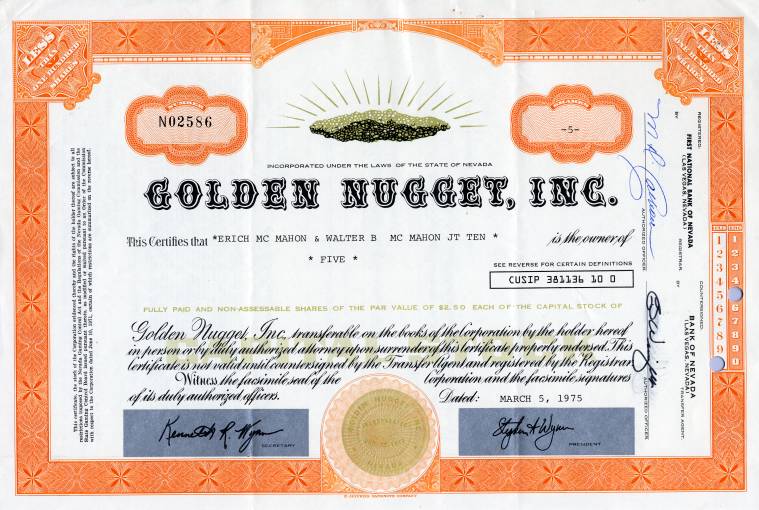 Certificate
After the Nevada legislature legalized gambling in 1931, Las Vegas became the scene of several small gambling establishments. In 1938, Guy McAfee arrived in Vegas. McAfee had previously served in the Los Angeles Police Department's vice squad. Unfortunately for him, he also was running various gambling houses, which came to light and forcing his resignation. Facing possible legal action, McAfee moved to Las Vegas and bought a club, naming it the "91 Club." In 1945, McAfee, along with investor G.C. "Buck" Blaine, began overseeing the construction of the Golden Nugget on downtown Las Vegas' Fremont Street. The Golden Nugget opened in August 1946 with mahogany bars, imported marble floors and crystal chandeliers. When the Golden Nugget opened, it was the largest and most luxurious casino in downtown Vegas. Its opening date also makes it one of the oldest casinos in Vegas. In 1951, the Golden Nugget was incorporated and McAfee became the company's first president. McAfee retired in 1960 and Buck Blaine became the next president. During the 1960's, Blaine and the corporation purchased adjoining Fremont Street properties to enlarge the Golden Nugget. However, the casino remained just that -- a casino. That would change in 1972 when developer Steve Wynn purchased a stake in the Golden Nugget operations. In 1973, Wynn was named president and CEO. He began an ambitious expansion program that included adding hotel rooms to the casino. In 1977, the Golden Nugget premiered its first hotel rooms with the opening of its 17-story, 579-room building. The Golden Nugget's facade was remodeled in 1983. A second hotel tower was added in 1984 and a third in 1989. In May 2000, Wynn sold the property to MGM Mirage The Golden Nugget was originally built in 1946, making it one of the oldest casinos in the city. Jackie Gaughan at one time owned a stake in the hotel as part of his many downtown properties. Steve Wynn bought a stake in the Nugget, which he increased so that, in 1973, he became the majority shareholder, and the youngest casino owner in Las Vegas. In 1977 he opened the first hotel tower and the resort earned its first four diamond rating from Mobil Travel Guide. It was the foundation for Wynn's rise to prominence in the casino industry. The second hotel tower opened in 1984 along with the showroom, and the third tower was opened in 1989. On May 31, 2000, the Golden Nugget (and all of Steve Wynn's other properties) was sold to Kirk Kerkorian; the consolidated corporation was known as MGM Mirage and has been the largest casino corporation in Las Vegas since that date. 1907 Las Vegas' first telephone installed at One Fremont Street; The phone number? "Ring 1, please" 1909 Gambling outlawed in Nevada 1931 Gambling legalized in Nevada - again 1945 Guy McAfee, an ex-vice detective from Los Angeles, announced plans to build the Golden Nugget 1946 The Golden Nugget opened its doors for an initial investment of $1,000,000, and was named the "largest casino in the world" 1951 The Golden Nugget partnership was converted into a corporation 1952 Guy McAfee became the Golden Nugget's first president 1960 Guy McAfee retired and Buck Blaine, an original investor, became president of the Golden Nugget 1972 Steve Wynn purchased controlling stock in the Golden Nugget 1973 Steve Wynn was elected to the board of directors and became president replacing Buck Blaine 1974 The Golden Nugget's casino underwent its first renovation since it opened, at a cost of $2 million 1977 The Golden Nugget opened its first tower and became a "Gambling Hall and Saloon" 1982 Steve Wynn announced plans to build a new addition to the Golden Nugget Frank Sinatra performs at the Golden Nugget, bringing headline entertainment to the hotel/casino 1984 Frank Sinatra and Willie Nelson inaugurated the Theatre Ballroom The Golden Nugget received its first Mobile Four-Star Award The luxurious, all-suite Spa Tower opened 1985 The Golden Nugget held its first poker tournament 1988 Golden Nugget Laughlin, located on the Colorado River, 90 miles southwest of Las Vegas, opened its doors 1989 The South Tower opened 1995 The Fremont Street Experience opens, transforming the world's most famous neon street into an urban theater with landscaped paths, and a 90-foot tall, 4-block long "space frame" with multi-sensory light shows choreographed to booming symphonic sound-boasting 2.1 million lights and 540,000 watts of sound - and has enhanced the attraction of Downtown Las Vegas. 1996 The Golden Nugget celebrates its 50th Anniversary 2000 MGM Grand acquires Mirage Resorts and the Golden Nugget 2004 Headliners return to the downtown resort as Tony Bennett and Jewel perform a series of shows in the Golden Nugget Theatre Ballroom Fremont Street Experience gets a $17 million makeover, as 12 million high-resolution, low-energy LED lights are installed to increase the visual quality of the light and sound show The Poker Room opens, marking the return of high-stakes poker to the Golden Nugget "The Casino" airs nationwide on the FOX Broadcasting Network 2005 Las Vegas turns 100, and a yearlong celebration of this milestone is celebrated from the stroke of midnight on January 1, 2005 through December 31, 2005 Landry's Restaurants, Inc. acquires the Golden Nugget Hotels and Casinos in Las Vegas and Laughlin, and subsequently announces a multi-million renovation plan Vic & Anthony's Steakhouse opens History from Encyberpedia, Wikipedia, USA Today and OldCompany.com (old stock certificate research service)