Beautiful certificate from the Leopard Mining Company issued 1877. This historic document has an ornate border around it with a vignette of a leopard. This item has the original signatures of the Company's President, and Secretary, and is over 135 years old. 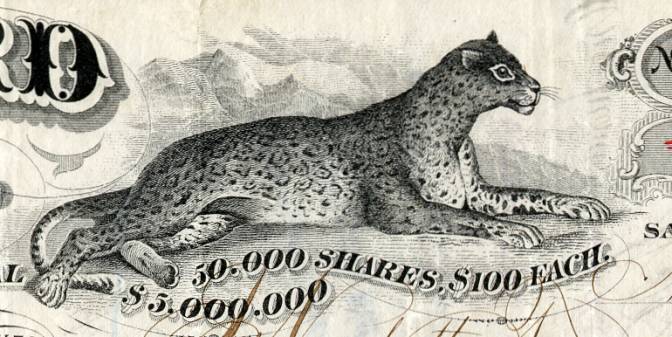 Certificate Vignette
According to Thompson and West (1881, p. 393), silver ores were discovered and the district was organized in 1872. "The excitement incident to the discovery of the district caused the building of the town of Cornucopia, which at one time, in 1874, was quite lively and contained about 1,000 inhabitants." The Leopard Mining Company built "first a 10-stamp mile which was consumed by fire and replaced by a twenty-stamp mill " " " which was likewise destroyed" in 1880, whereupon the population dwindled to 174. No production has been reported since 1882 except from 10,000 tons of old mill tailings during 1937-40 (table 15). There are two principal mines in the district, the Leopard (Cornucopia) which was* the larger, and the Panther. The Leopard shaft was said to be 5OO ft deep, but the deep workings are caved (Emmons, 1910, p. 62). The Leopard vein was worked extensively in an area now covered by mine dumps (Coats, 1967, p. 3). History from OldCompany.com (old stock certificate research service)