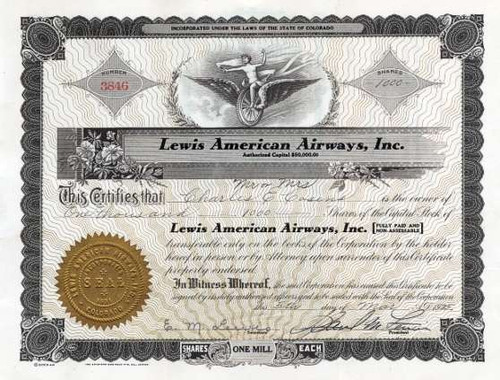 Beautifully engraved certificate from the Lewis American Airways, Inc. issued in 1935. This historic document has an ornate border around it with a vignette of an allegorical man on a wheel with wings. This item is hand signed by the Company's President ( Paul M. Lewis ) and Secretary ( E. M. Lewis Secretary ) and is over 68 years old. The certificate has been folded in thirds and in EF condition.

Certificate Vignette
In 1937, the Airomobile was a one-of-a-kind experimental model built by engineers from Franklin Auto and Lewis American Airways. It was intended to be a low-priced, mass produced car. The design was the result of Paul M. Lewis, who wanted a simple inexpensive ( target price of $300 ) and safe automobile in 1934. The three-wheel design met his needs for streamlining, and was also quite stable.

A year after developing the basic design, Lewis incorporated as Lewis-American Airways and offered stock in the company. He then selected Carl Doman and Ed Marks, former engineers with the Franklin Automobile company, who had formed the Doman-Marks Engine Company, to design and build the car. The Airomobile stimulated great interest but never made it into production. After many technical problems were sorted out with the the vehicle a prototype was eventually built in 1937. The vehicle was powered by a horizontally opposed, 129-cu.in overhead valve, air cooled four cylinder unit (57hp) created by the Dorman Marks Engine Company . This unit was later to find great success in light aeroplanes. The body was created from steel and was very aerodynamic with it trailing to the rear and having two large fish like fins. The Airomobile did have a very low centre of gravity and was said to take corners faster than any 4-wheeler at the time. Lewis set off on a cross-country promotional tour with the Airomobile, logging some 45,000 miles in only a few short months. Along the way, he managed to convince numerous interested parties in his vision of an affordable, safe automobile for all Americans. In the Jan./Feb. 1971 issue of Special Interest Automobiles magazine, Lewis is quoted as stating that "The Airomobile was carefully engineered to turn corners very fast. Even faster than possible with a 4-wheel car, rear-wheel driven. To accomplish this, we needed to build the Airomobile with a very low center of gravity. The engine was mounted forward of the front wheels and the passengers rode, therefore, on the long end of the teeter-totter. This made for a very easy ride." In 1938 the Airomobile was slightly redesigned with a new front section that included the lights being moved from the top of the wings and built into them. Lewis again toured the USA but interest in the vehicle had diminished and plans to put the vehicle into full production were squashed with the onset of the second World War and so the vehicle never became anything more than a prototype. The vehicle was studied by Porsche in 1937 and they took great interest in the vehicle's flat-four transaxle design. Shortly afterwards a very similar design appeared in the Volkswagon Beetle and went on to power it for many years.