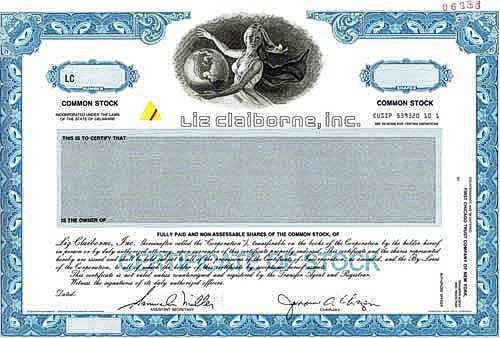 Liz Claiborne Inc. now Kate Spade & Company (founded in 1976 in Manhattan), and then as Fifth & Pacific Companies, Inc. (from 2012 to 2014), is a fashion company that designs and markets a range of women's and men's apparel, accessories and fragrance products under the Kate Spade New York and Jack Spade labels. The company is owned by Tapestry, Inc.  Printed signature of Jerome Chazen, Co Founder. 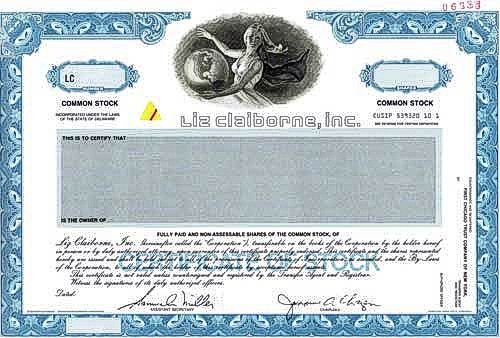 Jerome A. Chazen (March 21, 1927 – February 6, 2022) was an American businessman who was the founder and chairman of Chazen Capital Partners. He was also one of four and last surviving founders of Liz Claiborne.

Liz Claiborne Inc. was founded in 1976 by Liz Claiborne, Art Ortenberg, Leonard Boxer, and Jerome Chazen. In 1980, Nina McLemore founded Liz Claiborne Accessories. Liz Claiborne Inc. went public in 1981 and made the Fortune 500 list in 1986, ten years after it was founded, with retail sales of $1.2 billion. After retiring in 1989, Claiborne died on June 26, 2007, at the age of 78 from complications from cancer. Robert Abajian succeeded her as head of design for the company, remaining in that role until his retirement in 1994.

On February 25, 2014, Fifth & Pacific Companies was renamed as Kate Spade & Company. Craig A. Leavitt succeeded William McComb as CEO, whose retirement marked the official end of the company's transformation from Liz Claiborne to Kate Spade.

Specimen Certificates are actual certificates that have never been issued. They were usually kept by the printers in their permanent archives as their only example of a particular certificate.  Specimens were also used to show prospective clients different types of certificate designs that were available. Most specimens are numbered “00000” and are stamped “SPECIMEN”, commonly in the signature area. Specimens are usually minimally punch cancelled.