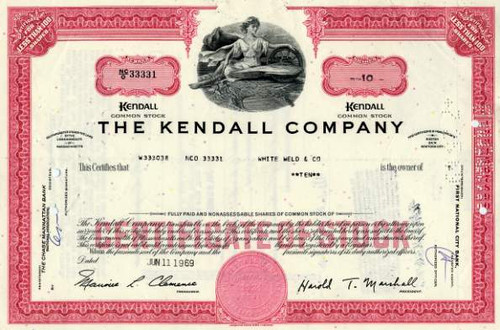 Beautifully engraved certificate from the Kendall Company issued no later than 1972. This historic document was printed by the American Banknote Company and has an ornate border around it with a vignette of an allegorical woman rolling a wheel with wings over a map of the United States. This item has the printed signatures of the company's president and treasurer and is over 45 years old. 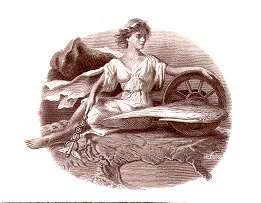 Certificate Vignette
The firm which was eventually to become The Kendall Company began in 1903, when Henry P. Kendall bought the Lewis Batting Company in Walpole, Massachusetts. At the time of its purchase, the mill provided a livelihood for about 80 people who produced cotton batts, carpet linings and absorbent cotton. Mr. Kendall had a penchant for improving products and the processes used to make them, and that led to the development of the health and hygienic products which would later become catalysts for his company's future growth. As business burgeoned, Henry Kendall recognized the wisdom of manufacturing his own cloth instead of buying it from an outside source; he purchased a cotton mill in Camden, South Carolina in 1916, helping his company to become one of the first American companies to integrate its operations from spinning, weaving and finishing the broadwoven fabrics used in dressings. World War I, although a time of adversity for many, was a catalyst for growth at Henry Kendall's young company; the realities of the battlefield created a tremendous need for surgical dressings made from the company's absorbent cotton gauze. When the end of the war saw a fall-off in demand for dressings, Kendall was prompted to diversify. Soon the company was producing hospital dressings, cheesecloth, sanitary napkin gauze and other coarse-mesh products, and acquiring additional spinning and weaving plants to keep up with demand. Many of these products were marketed under the now legendary CURITY® trademark. Kendall expanded beyond U.S. borders for the first time in 1926, opening a subsidiary in Toronto, Canada. The company grew through acquisitions in the '20's and '30's, and the advent of World War II brought a renewed demand for surgical dressings and first aid products. During this same time period, the company acquired a manufacturer of elastic stockings, and introduced its first nonwoven fabrics and industrial tapes. The '50's and '60's brought further significant change. When the Korean War ended, the demand for surgical dressings decreased, but the slack was quickly taken up by increasing sales of textiles, and health and hygienic products. In 1972, Kendall became a wholly-owned subsidiary of The Colgate-Palmolive Company, and during its 16-year association with the consumer products giant continued to grow both domestically and internationally. In late 1988, a new company formed by management and outside vendors purchased Kendall, and in 1992, issued publicly traded shares listed on the NASDAQ Stock Market and later traded on the NYSE. With its strong history of quality and cost effective products, Kendall was ultimately acquired by Tyco International, Ltd. in October of 1994, becoming part of their Disposable & Specialty Division. Today Kendall manufactures a diverse line of healthcare and specialty industrial products, and operates in more than 75 countries worldwide. It is a company which, through astute management, timely acquisitions and a cutting-edge product line, has risen from humble beginnings to the prestigious position it holds in today's global economy. History from Wikipedia and oldcompany.com.