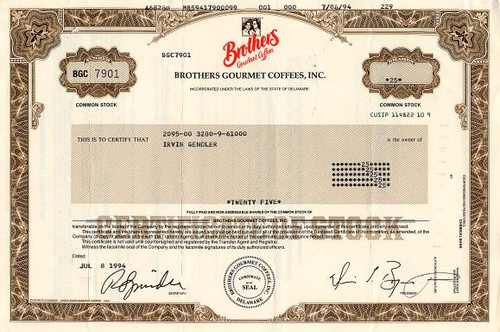 Beautiful certificate from the Brothers Gourmet Coffees, Inc issued in 1994. This historic document was printed by Security-Columbian Banknote Company and has an ornate border around it with a vignette of the company logo. This item has the signatures of the Company's President, Donald D. Breen and Secretary and is over 13 years old. 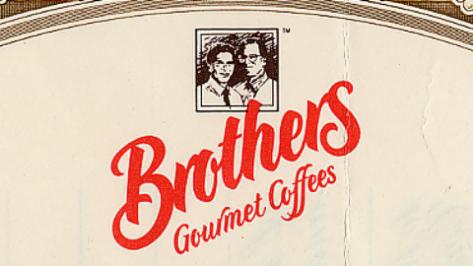 Certificate Vignette
Brothers Gourmet Coffees, Inc. was a leading branded roaster of wholesale gourmet coffees, offering a variety of unique gourmet coffees and packages to grocery, military, mass and specialty merchandisers, food service and warehouse club classes of trade. Sam and Dennis Boyer were the brothers behind Brothers Gourmet Coffees. Their father operated an institutional coffee company in Denver, so they were familiar with the business from him but initially pursued independent interests. During the 1980s the brothers established their own coffee company in a 20 by 20 foot office in Denver. They had three employees. Their company operated on a regional basis until merging with Specialty Coffee Holdings of Concord, New Hampshire, in December 1992. The merger created a privately held company with four sales territories, 13 regional sales offices, and manufacturing and distribution facilities in Denver, Concord, and Pittsburgh. Thus, the current company formed in 1992 with a recapitalization and merger with Brothers Gourmet Products, Inc., and Boyer's International, Inc., both established in 1988. Collectively the two companies were the leading wholesaler of gourmet coffee products in the Rocky Mountain region. Two wholesale gourmet coffee distributors--Nicholas Coffee company (founded in 1919) and Elkin Coffee, Inc. (founded in 1933)--were predecessor companies of Brothers Gourmet Coffees. After the merger Brothers Gourmet Coffees became the largest wholesaler of gourmet coffees in the United States. Brothers was now the major supplier of gourmet coffees to grocery stores in the United States, as well. Dennis Boyer explained the appeal of Brothers to supermarkets in the Tea & Coffee Trade Journal: "We have the infrastructure to deliver to our markets as well as advertise our various brands.... [W]e can assure quality and freshness from roaster to store." The company distributed its Brothers brand, Cafe du Jour, and Nicholas Gourmet Coffees to more than 6,000 grocery stores and its Fairwinds gourmet coffees to 3,000 gourmet stores. With product in all 50 states, the company became a national presence. Dennis Boyer explained in Supermarket News: "Our combined resources will enable us to continue our shared corporate visions to offer our customer the very best gourmet coffees as we compete in the national marketplace." In 1993 Brothers Gourmet Coffees acquired Hillside Coffee of California, a West Coast wholesale coffee roaster and distributor. The company paid $38.5 million in cash for the subsidiary of Chock Full o' Nuts Corporation, in addition to offering $1.5 million in Brothers common stock and assuming $22 million in Hillside obligations. Hillside Coffee was to operate as a wholly owned subsidiary of Brothers. As Dennis Boyer explained at the time in Supermarket News: "We're in the business of providing a gourmet coffee experience to as many consumers as possible. The acquisition allows us to advance this objective by strengthening grocery store distribution and securing the fine Hillside operations." History from Wikipedia and OldCompanyResearch.com (old stock certificate research service).