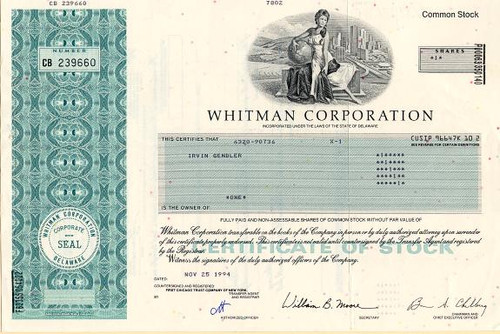 Beautiful certificate from the Whitman Corporation issued in 1994. This historic document was printed by American Banknote Company and has an ornate border around it with a vignette of an allegorical woman. This item has the signatures of the Company's Chairman, Bruce S. Chelberg and Secretary, William Moore and is over 14 years old.

Certificate Vignette
Founded 1851 as the Illinois Central Railroad. It changed name to Illinois Central Industries in 1962, IC Industries in 1975, and to Whitman Corporation in 1988. Over this time it evolved into one of the largest Pepsi bottling firms, operating as its subsidiary the Pepsi-Cola General Bottlers. In 1972, IC acquired Midas, running it as a subsidiary until all non-bottling enterprises were sold off in 1978. In 2000, Whitman acquired PepsiAmericas and assumed that company's name.