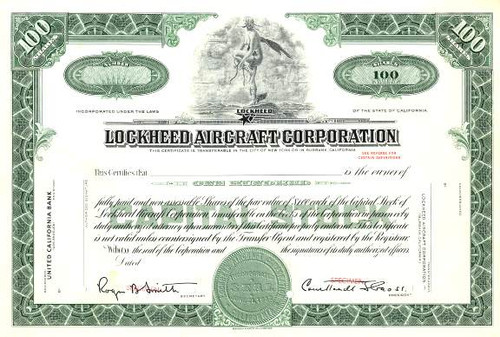 Beautifully engraved SPECIMEN certificate from the Lockheed Aircraft Corporation. This historic document was printed by the Jeffries Banknote Company and has an ornate border around it with a vignette of a nude woman attaching wings to her feet on a mountain top. This item has the printed signatures of the Company's President and Secretary. This is the first time we have seen this vignette and we only have one of these certificates. 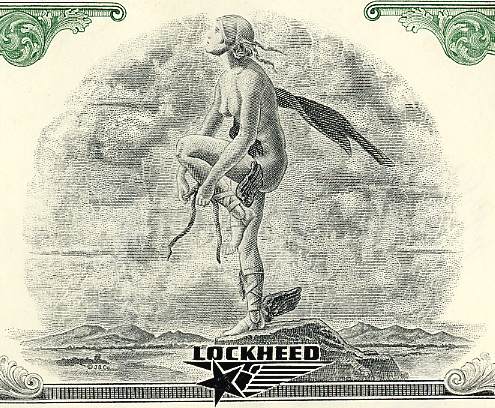 Certificate Vignette
Founded in 1926 by Allan Loughead ( later the name was legally changed to Lockheed ) and his brother Malcolm, the company was bought by Detroit Aircraft Corporation in 1929, only to have the parent corporation file for bankruptcy in early 1932. Later that year, on June 21, 1932 a group of investors led by Robert E. Gross purchased the bankrupt Lockheed Aircraft Corporation for $42,000. The Burbank company turned out a bargain. The advent of World War II began the company's business as a defense contractor by beginning with the P-38 Lightning bomber and still continues as a primary contractor for U.S. defense aircraft as Lockheed Martin Corporation About Specimens Specimen Certificates are actual certificates that have never been issued. They were usually kept by the printers in their permanent archives as their only example of a particular certificate. Sometimes you will see a hand stamp on the certificate that says "Do not remove from file". Specimens were also used to show prospective clients different types of certificate designs that were available. Specimen certificates are usually much scarcer than issued certificates. In fact, many times they are the only way to get a certificate for a particular company because the issued certificates were redeemed and destroyed. In a few instances, Specimen certificates were made for a company but were never used because a different design was chosen by the company. These certificates are normally stamped "Specimen" or they have small holes spelling the word specimen. Most of the time they don't have a serial number, or they have a serial number of 00000. This is an exciting sector of the hobby that has grown in popularity and realized nice appreciation in value over the past several years.