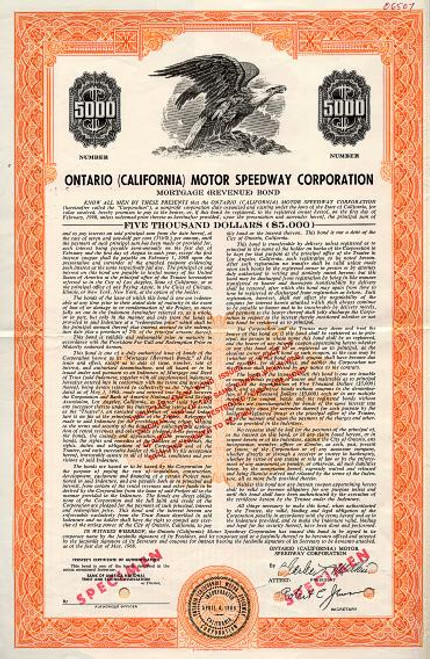 Beautiful RARE engraved specimen certificate from the Ontario (California) Motor Speedway Corporation dated in 1968. This historic document was printed by Jefferies Bank Note Company and has an ornate border around it with a vignette of an eagle. This item has the printed signatures of the Company's President and Secretary and is over 39 years old. 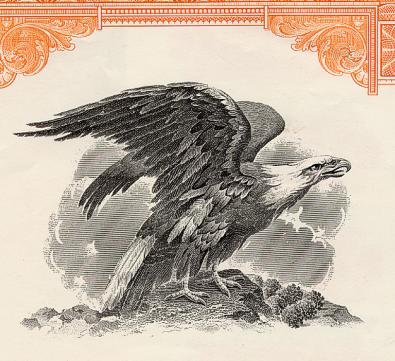 Certificate Vignette
Ontario Motor Speedway Location Ontario, California Capacity 140,000 Opened September 1970 Closed November 1980 Construction Cost $25.5 million Architect Kite & Overpeck A.I.A. Architects/John Hugenholtz of Zandvoort, Holland and Michael Parker of Portland, Oregon. Former Names None Major events USAC Championship Car California 500 (1970-1980) NASCAR Winston Cup Los Angeles Times 500 (1974-1980) Formula One/Formula 5000 Questor Grand Prix (1971) Oval Circuit Length 4.0 kilometres (2.5 miles) Banking Turns - 9 degrees° Infield Road Course Circuit Length 5.17 kilometres (3.21 miles) Ontario Motor Speedway located in Ontario, California, was a 2.5-mile race track built similar to the Indianapolis Motor Speedway. Designed by California born architect Walter Ted Tyler, the track opened in 1970, and was considered state of the art at the time. Track management planned to make OMS as a replica of Indianapolis with only a few exceptions. The racing surface was one lane wider and the shortchutes were banked unlike Indianapolis, which made OMS slightly faster. In addition, OMS was built with an infield road course, making it a multi-purpose facility. At the time, Indianapolis did not have an infield road course, and one was not built there until 2000. OMS also included a special gift from Indy: a circle of bricks unearthed from the Indianapolis Motor Speedway were laid in OMS's victory lane. The first race, The California 500, (held on September 6, 1970), was a success. The Indianapolis 500 was traditionally held Memorial Day weekend, so track officials figured Labor Day weekend was a perfect choice for the California 500 event. A successful Formula Libre event was held at the track in March 1971 called the Questor Grand Prix. The event featured a head-to-head battle between drivers using Formula One and Formula 5000 racecars. The event was an attempt at attracting Formula One to the track.[1] The Grand Prix was won by Mario Andretti. However, neither event built up momentum, and the track started a downhill slide soon afterward. Lack of promotion and an inability to capitalize on the inaugural race's successes contributed. It was planned to be part of the IndyCar series triple crown along with the Indianapolis 500, and Pocono 500, however, only the Indy 500 remained a household name. OMS held the California Jam concert in order to promote the track more. The California Jam featured numerous rock music bands, and was profitable for the track. NASCAR was running at OMS for a few years and would hold the last race of the NASCAR Winston (now Nextel) Cup Series, the Los Angeles Times 500, there until the 1980 racing season. The facility also featured a dragstrip which hosted NHRA events. Track management went bankrupt and the speedway was deemed a financial failure. 1980 would be its last year of operation and the City of Ontario sold the track for $10 million to Chevron Land Management. The track was demolished in 1981 at a cost of $3 million and left as an empty lot. The property remained vacant for several years until the mid-1980s when a Hilton Hotel was built on turn 4 of the old speedway site. It was the first multiple story building of its kind in the City of Ontario. As of the mid 2000s, development on the property has increased. Over half of the old speedway property, adjacent to Interstate 10, has been developed commercially. However, a minor tribute to the racing heritage of the property can be seen in the street names of the developed area (ex: Duesenburg Drive, Ferrari Lane, and others), in much the same way that the developed area that was formerly Riverside reflects the same heritage, with roads named after famous drivers. After the failure of the California 500, the IndyCar series replaced the race with the Michigan 500 at Michigan International Speedway. Eight years later in 1988, Riverside International Raceway in nearby Riverside, California was also sold and demolished in favor of development. OMS architect Walter Ted Tyler later designed the Olympic Velodrome for the 1984 Olympics in Los Angeles where many world bicycling records were broken. History from Wikipedia and OldCompanyResearch.com (old stock certificate research service). About Specimens Specimen Certificates are actual certificates that have never been issued. They were usually kept by the printers in their permanent archives as their only example of a particular certificate. Sometimes you will see a hand stamp on the certificate that says "Do not remove from file". Specimens were also used to show prospective clients different types of certificate designs that were available. Specimen certificates are usually much scarcer than issued certificates. In fact, many times they are the only way to get a certificate for a particular company because the issued certificates were redeemed and destroyed. In a few instances, Specimen certificates we made for a company but were never used because a different design was chosen by the company. These certificates are normally stamped "Specimen" or they have small holes spelling the word specimen. Most of the time they don't have a serial number, or they have a serial number of 00000. This is an exciting sector of the hobby that grown in popularity over the past several years.