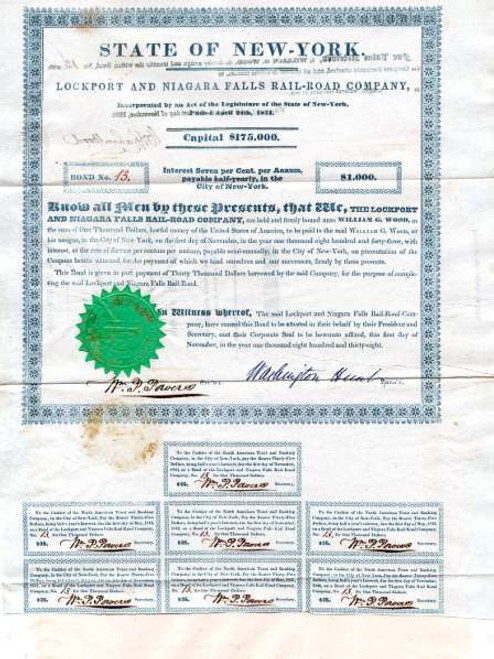 Beautifully engraved RARE certificate from the Lockport and Niagara Falls Railroad Company issued in 1838. This is one of the earliest known Railway bonds and is very rare. This historic document has an ornate border around it with an early train embossed on the seal. This item is hand signed by the Company's President ( Washington Hunt ) and Secretary ( William P. Powers ). The certificate has minor staining around the seal area, otherwise EF condition. The certificate has seven unused coupons attached to it on the bottom that are not shown in the scan. The certificate is signed by William Graham Wood on the verso. 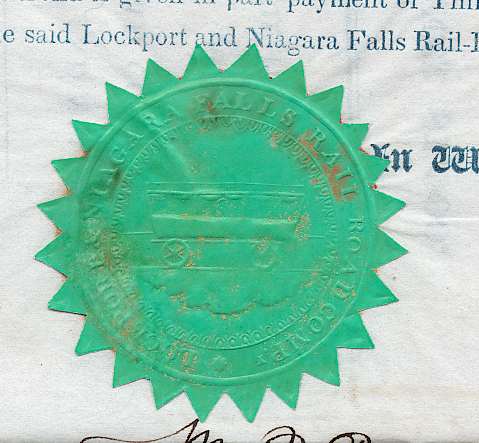 Embossed Corporate Seal
The development of rail transportation in Niagara County began in the 19th century with the Strap Railroad between Lockport and Niagara Falls. The cars at first were drawn along the rails by horses when the line opened in April of 1837 but by years end, steam locomotives had replaced the horses.

Washington Hunt's Signature
Washington Hunt, a Representative from New York; born in Windham, Greene County, N.Y., August 5, 1811; moved with his parents to Portage, Livingston County, N.Y., in 1818; completed preparatory studies; studied law; was admitted to the bar in 1834 and commenced practice in Lockport, N.Y.; unsuccessful candidate for election in 1836 to the Twenty-fifth Congress; appointed judge of the court of common pleas of Niagara County and served from January 30, 1836, to February 4, 1841; elected as a Whig to the Twenty-eighth, Twenty-ninth, and Thirtieth Congresses (March 4, 1843-March 3, 1849); chairman, Committee on Commerce (Thirtieth Congress); was not a candidate for renomination in 1848; comptroller of New York in 1849 and 1850; Governor of the State 1850-1852; unsuccessful candidate for reelection; retired to his farm near Lockport; temporary chairman of the Whig National Convention in 1856; was tendered the Democratic nomination for Vice President in 1860 but declined; delegate to the Democratic National Convention in 1864; died in New York City February 2, 1867; interment in Glenwood Cemetery, Lockport, N.Y.