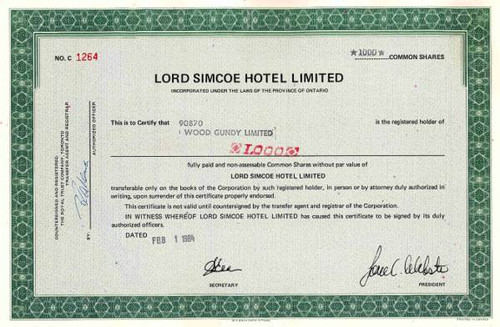 Beautifully printed certificate from the Lord Simcoe Hotel Limited issued in 1984. This historic document was printed by the B A Banknote Company and has an ornate border around it. This item has the printed signatures of the Company's President and Secretary and is over 19 years old. The Lord Simcoe Hotel was located at the corner of University Ave and King Streets in Toronto for many years, and was the local "watering hole" for the investment community. The hotel was controlled by the Websters of Montreal, a monied family that built and ran the hotel. However, in the 1980's the family decided to sell the property for redevelopment, and a large tower now occupies the property. The Lord Simcoe was a public company, but the stock was very tightly held. When the property was sold and ultimately wound up its affairs, the company paid out all proceeds to shareholders and the all the certficates became "worthless" as redeemable securities but they are great collectibles. The hotel was named after John Graves Simcoe who was the first Lieutenant-Governor of Upper Canada, now the Province of Ontario in Canada. Although he was only in Upper Canada from 1792 to 1796, in that short time he introduced governance, defense and settlement policies that profoundly influenced the development of the province. John Graves Simcoe was born in Cotterstock, England, on February 25, 1752. His father was a distinguished Royal Navy captain who died en route to Quebec with General Wolfe in May 1759. Simcoe was raised in Exeter by his mother and educated at Exeter Free Grammar School, Eton and Oxford. He began a life-long military career in 1770 when he secured a commission as an ensign in the 35th Regiment of Foot. In 1775, Simcoe was sent with his regiment to Boston, then under siege by Washington's Continental Army. He was given command of the Queen's Rangers in 1777. Used primarily for reconnaissance, this Loyalist force was one of the most successful British regiments during the war. Simcoe was captured in an ambush in 1779 and spent three months as a prisoner. In 1781, Simcoe returned to England on convalescent leave. The following year, he married Elizabeth Posthuma Gwillim, a wealthy heiress. The Simcoes purchased an estate at Wolford near Honiton and built Wolford Lodge (the lodge remained in family hands until 1923). Simcoe spent the next few years enlarging and improving the estate but always maintained a keen interest in events in North America. Simcoe was appointed as the first Lieutenant- Governor of Upper Canada in 1791. He arrived in the new province in June 1792, accompanied by his wife and their two youngest children. Although there had been considerable loyalist settlement in Upper Canada, particularly in the east, most of the province was still a wilderness. Simcoe presided over the introduction of British institutions of government. He devised military strategy for defending Upper Canada against the United States and built strategic roads to facilitate troop movements, promote settlement and encourage trade.