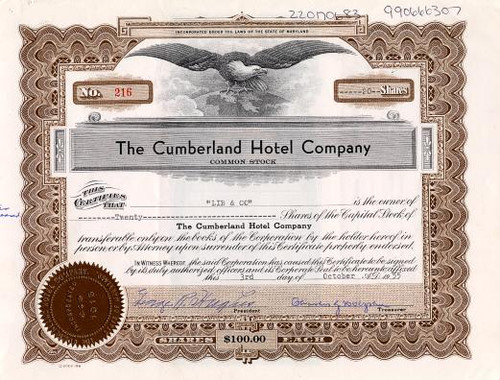 Beautiful certificate from the Cumberland Hotel Company issued in 1955. This historic document was printed by GOES and has an ornate border around it with a vignette of an eagle. This item has the signatures of the Company's President and Secretary and is over 51 years old.

Certificate Vignette
The Cumberland Hotel Company was organized to build the magnificent Fort Cumberland Hotel. The Fort Cumberland Hotelwas built in 1917 and is a one of only a few remaining early 20th-century hotels in Cumberland. Its construction reflects the height of Cumberland's prosperity as a railroad center. The demand for hotel rooms increased as the railroad brought more visitors to Cumberland, and even more traveling through. In small cities across the country, local businessmen and city officials believed they could bring even more business to their city if they provided modern, respectable accommodations, such as the Fort Cumberland. These hotels were symbols of progress and modernity for a town. Architectural features were generally conservative, signifying refinement and respectability, to appeal to the mainstream middle-class. The six-story brick Fort Cumberland Hotel was a typical small city hotel. Among its significant features are the classically inspired stone ornamentation and the belt courses between the fifth and sixth floors. The design also included a dentilled stone cornice, as well as a carved panel frieze and triglyphs. On these triglyphs are clusters of flowers which appear above the upper story windows. Generally, hotels from this period provided a lobby, dining room, and a ballroom or smaller gathering rooms on the first floor. These first floor spaces were often used by local organizations, which hotel owners encouraged to create greater ties between their business and the community. The upper floors contained the guest rooms. By the 1920s most guest rooms in small city hotels had their own bathrooms, while just three decades earlier individual bathrooms would have been quite rare. The Fort Cumberland Hotel is located at the corner of Baltimore and Liberty Sts., and is a contributing building to the Downtown Cumberland Historic District. Now the Cumberland Arms, it is not open to the public. Cumberland is located in mountainous Allegany County, Maryland, at the base of converging mountain ridges at the confluence of Wills Creek and the Potomac River. Established in 1787, the city conforms in its layout to the rugged topography within which it is situated. George Washington truly did sleep here--his headquarters during the French and Indian War were located at Fort Cumberland. The fort, and later the city, took its name from the Duke of Cumberland, son of King George II of Great Britain. Known as the "Gateway to the West," Cumberland gained prominence during the 19th century as a major transportation center and as an important economic focus for the region. The city was the site of the first National Road, the western terminus of the Chesapeake & Ohio (C&O) Canal, and a center for the railroad industry. History from the National Parks Service