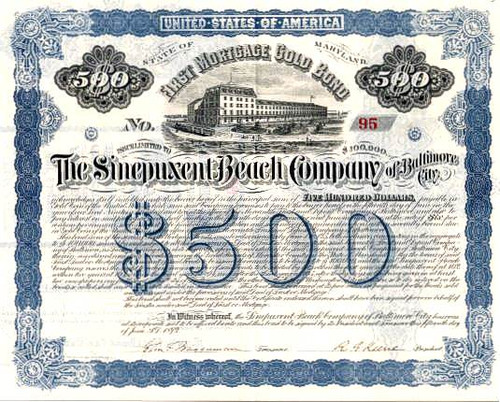 Beautifully engraved certificate from the Sinepuxent Beach Company issued in 1892. This historic document was printed by A. Hoen & Co. Baltimore, Maryland and has an ornate border around it with a vignette of the 1892 Atlantic Hotel in Ocean City Maryland with the beach, swimmers and a train in front and a flag on top that says "Atlantic Hotel". This item has been hand signed by the Company's President ( R. G. Keene ) and Treasurer ( John F. Waggaman ).

Certificate Vignette
Ocean City was founded in the late 1860s as a fishing village. Shortly thereafter, a group of Baltimore developers formed the Sinepuxent Beach Corporation to develop the island as a beach resort. The first public accommodation, The Atlantic, was built by the group in 1875, and it still stands today. Initially, visitors came by stage-coach and boats that ferried guests across the bays. Then in the late 1870s the railroad came, and the population of resort visitors mushroomed. By 1880, the original tract of land that included the resort's corporate limits was now home to three major hotels, a handful of cottages, a post office, two general stores, a railroad station, and the United States Life-Saving Station. Transportation to the resort during this early period was primarily by railroad. The railroad line was laid to the west side of Sinepuxent Bay in 1874; a railroad bridge coming into the resort at South Division Street was constructed across the bay in 1876. In 1890, the Sinepuxent Beach Company purchased all the land available from South 7th Street (now part of Assateague Island) to North 33rd Street. The land was platted into lots, blocks, and streets for sale and development. Ocean City's corporate limits were extended in 1898 from South 7th Street to North 15th Street. During the 1890s, additional hotels, casinos, cottages and a power plant were constructed in the resort. The resort's fishing industry began during the mid-1890s with fishing camps located between South 2nd Street and South 7th Street. It was during this era that pound fishing became a major source of income for Ocean City residents behind tourism. During the early 1900s, utilities (water and sewer) and streets were constructed, and the railroad lines were upgraded to meet increased demand. By mid-year in 1910, two additional land companies, the Fenwick Land Company and the Isle of Wight Land Company, had purchased the land to the Delaware State line and platted blocks and streets in the area that is now referred to as north Ocean City. Ocean City offers some 11,000 hotel rooms and a staggering 35,000 rental condos, including the famous Sanpiper Dunes. Ocean City's population swells dramatically between June and September. However, with a moderate climate, coastal Maryland is also an ideal destination for travelers seeking quick or extended getaways in the quieter off season.