Beautifully engraved unissued certificate from the Glen Echo Resort Company printed in 1892 when the company was incoporated. This historic document has an ornate border around it with a vignette of a river running through the mountains. This item and is over 114 years old. 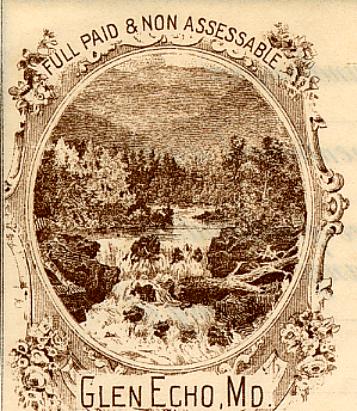 Certificate Vignette
Glen Echo's use as a cultural and educational center by the National Chautauqua Assembly ended when a rumor of malaria began in the fall of 1891. The Washington Railway and Electric Company later purchased the land and developed it into a major amusement park. For many generations residents of Washington D.C., rode the streetcar from the city to Glen Echo for a day in the country. By 1900, Glen Echo was on its way to becoming a premier amusement park, and it served the Washington area as such until 1968. Today the park has come full circle, the land and the historic buildings a back drop for a rich arts education program. Since 1971, the National Park Service at Glen Echo Park has been offering year-round activities in dance, theater, and the arts for the surrounding communities and for visitors from across the country. The park also administers an artist-in-residency program providing the public with an opportunity to see artists at work. There are concerts, demonstrations, workshops, and festivals during the warm months as a part of the Chautauqua Summer season. In addition, the antique hand-carved and hand-painted Dentzel carousel, saved by community effort, operates four days a week from May through September, and the Gallery and Bookshop features park artists in its exhibits.