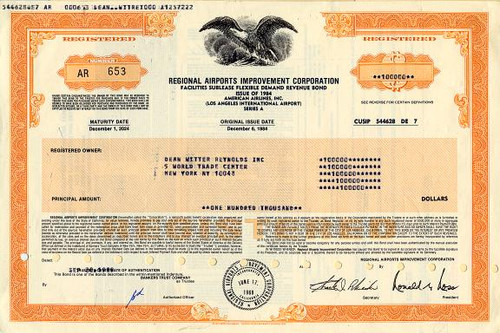 Beautiful $100,000 Bond Certificate from the Regional Airports Improvement Corporation - Los Angeles International Airport issued in 1989. This historic document was printed by United States Banknote Company and has an ornate border around it with a vignette of an eagle. This item has the printed signatures of the Company's President and Secretary and is over 18 years old. The bond was issued to Dean Witter Reynolds located in the World Trade Center Tower at 5 World Trade Center in New York. Punched cancelled.

Certificate Vignette
In 1928, the Los Angeles City Council selected 640 acres (2.6 km²) in the southern part of Westchester as the site of a new airport for the city. The fields of wheat, barley and lima beans were converted into dirt landing strips without any terminal buildings. It was named Mines Field for William W. Mines, the real estate agent who arranged the deal. The first structure, Hangar No. 1, was erected in 1929 and is now a historic landmark. Mines Field was dedicated and opened as the official airport of Los Angeles in 1930, and the city purchased it to be a municipal airfield in 1937. The name was officially changed to Los Angeles Airport in 1941, and to Los Angeles International Airport (LAX) in 1949. Prior to that time, the main airport for Los Angeles was the "Grand Central Airport" in Glendale. Until this time, the entire airport was located east of Sepulveda Boulevard. As the airport expanded westward to meet the Pacific Ocean, a tunnel was completed in 1953 so that Sepulveda Boulevard would pass underneath the airport's runways. It was the first tunnel of its kind. The architecture shown in The Jetsons was based on the Theme Building's exterior, then the Theme Building's interior was redesigned to have a "Jetsons" feel.The distinctive white "Theme Building," constructed in 1961, resembles a flying saucer that has landed on its four legs. It was designed by a team of architects and engineers headed by William Pereira and Charles Luckman, that also included Paul Williams and Welton Becket. The initial design of the building was created by James Langenheim, of the Pereira-Luckman firm. A restaurant that provides a sweeping view of the airport is suspended beneath two intersecting arches that form the legs. The Los Angeles City Council designated the building a cultural and historical monument in 1992. A $4 million renovation, with retro-futuristic interior and electric lighting designed by Walt Disney Imagineering, was completed before the "Encounter Restaurant" opened there in 1997. At one time, tourists and passengers were able to take the elevator up to the roof of the "Theme Building", but after the September 11 attacks, the rooftop was closed off to everyone for security reasons. It was once said the rooftop would reopen for public use, but that was determined to be a rumor. The first jet service appeared at LAX in 1959, transporting passengers between LAX and New York. The first wide-bodied jets appeared in 1970 when TWA flew Boeing 747s between LAX and New York. Groundbreaking for the new Tom Bradley International Terminal was conducted in 1982 by Mayor Tom Bradley and World War II aviator General James Doolittle, and the $123 million terminal was opened in 1984. In 1996, a new 277 foot (84 m) tall air traffic control tower, with overhanging awnings that shade the windows and make the building vaguely resemble a palm tree, was constructed at a cost of $29 million. The Theme Building decorated with light displays for the holidaysIn 2000, prior to Los Angeles hosting the Democratic National Convention. fourteen acrylic glass cylinders, each up to ten stories high, were placed in a circle around the intersection of Sepulveda Boulevard and Century Boulevard, with additional cylinders of decreasing height following Century Boulevard eastward. The cylinders, lit from inside, slowly cycle through a rainbow of colors, and provide an additional landmark for visitors arriving by air at night. This was part of an overall facelift that included new signage and various other cosmetic enhancements. At various points in its history, LAX has been a hub for TWA, Air California, Continental, Delta, PSA, USAir, Western Airlines, and the Flying Tiger Line. Starting in the mid-1990s under Los Angeles Mayors Richard Riordan and James Hahn modernization and expansion plans for LAX were prepared only to be stymied by a coalition spearheaded by residents who live near the airport angry at noise, pollution and traffic impacts of the existing facility. In late 2005 newly elected L.A. Mayor Antonio Villaraigosa was able to reach a compromise allowing some modernization to go forward while efforts are made to encourage future growth be spread among other facilities in the region. On July 29, 2006 Runway 7R/25L was closed for reconstruction until March 25, 2007. The reconstruction is to move the runway 55 feet south to prevent runway incursions and prepare the runway for the next generation of Airbus A380. The newly moved runway will also have storm drains, and enhanced runway lighting, something that the other 3 runways do not have. The reconstruction of runway 25L will make way for a central taxiway in between runways 25L and 25R. On September 18, 2006, Los Angeles World Airports announced a $503 million facelift of the Tom Bradley International Terminal. Improvements include installing new paging, air conditioning and electrical systems, along with new elevators, escalators, baggage carousels and a digital sign that will automatically update flight information. Also a large explosives-detection machine will be incorporated into the terminal's underground baggage system, in which the federal government will fund part of the system. Before the 1930s, existing airports used a two-letter abbreviation based on the weather station at the airports. So, at that time, LA served as the designation for Los Angeles International Airport. But, with the rapid growth in the aviation industry, the designations expanded to three letters, and LA became LAX. The letter X does not otherwise have any specific meaning in this identifier. Moreover, the X perhaps indicates a blank letter or empty space in the code. Portland International Airport in Oregon also has a similar code PDX. History from Wikipeida and OldCompanyResearch.com.