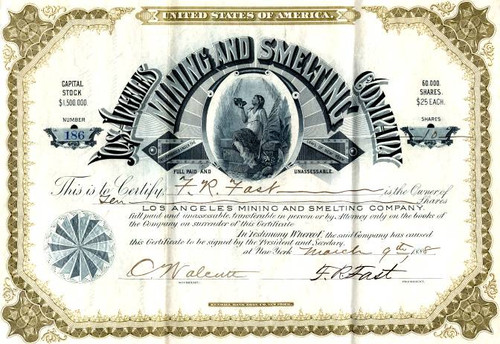 Beautifully engraved issued certificate from the Los Angeles Mining and Smelting Company printed in 1988. This historic document was printed by the Kendall Banknote Company and has an ornate border around it with a vignette of a native girl holding a water vessel. This item has the signatures of the Company's President, F. R. Fast and Secretary, C. Walcutt, and is over 123 years old.

Certificate Vignette
History of Tecopa Death Valley! In the spring of 1875, the Brown Brothers, William D. and Robert D. came to the Amargosa country east of Death Valley. They were looking for some good ore, and ore is what they found. In the hill just south of Resting Springs on the Spanish Trail was an immense body of ore, which they named Balance. The silver was running $60 a ton and carried with it a great percentage of lead. The brothers no sooner named their location, and then sold an interest to George Hearst. Hearst had missed buying in at their Darwin discovery. Together they organized the Balance Consolidated Gold and Silver Mining Company. Assuming that after every strike, a town follows. The brothers set in from the start and laid out a townsite on Willow Creek some 6 miles southeast of Resting Springs. The town christened Brownsville (Tecopa) and started a potato and vegetable ranch. Shortly after, they setup a sawmill in the Spring Mountain to the east. That same summer in 1875, Hehemia "Red" Clark built four beehive-shaped charcoal kilns to supply Tecopa with charcoal. The news of the strike was all that was needed to draw Jonas Osborne, who at that time was a mine superintendent in Hamilton, Nevada, into the Resting Springs area. Osborne bought several claims, some running as high as $600 a ton. He soon found out that the bulk of the ore needed smelting. Therefore, Jonas built a smelter and started experimenting to find the best way to work it. By the spring of 1877, he had pretty well figured it out, but was short the capital to build a larger smelting furnace. After finding several Los Angeles bankers to invest, in May 1877 they organized the Los Angeles Mining and Smelting Company with capital of $960,000. Now Jonas being the intermediary, he bought the principle mines in the district and Brownsville as well, giving it the name Tecopa after the local pakwinavi. After several expense efforts at smelting in 1878 Osborne gave up and turned to milling the carbonate ores. Along with the other mines, he had invested in Jonas decided to locate the pulverizer at Resting Springs so 6 miles away. By February of 1879, Tecopa was all but abandon and the new camp was a boom. A flurry of construction started and the new camp had a large stone hotel, several adobe stores and saloons, plus a brand new house for the superintendent Osborne. Then the U. S. Post Office decided to move to and kept the name Tecopa regardless of what the locals called it. The brand new pulverizer turned out to be a large hunk of junk, it never paid to run. >hr> After hearing about a rich strike of silver-lead ore in the Resting Springs district in 1874, "Professor" William D. Brown and his brother Robert D. headed to the Amargosa east of Death Valley in 1875 to look for more. They found it just south of Resting Springs on the old Spanish Trail. It was an "immense body of splendid ore" which they named the Balance (Lingenfelter). They promptly sold an interest to George Hearst and formed the Balance Cons. Gold and Silver Mining Company. Hearst had previously missed a chance at the brother's Darwin discoveries. Jonas Osborne, one of the first to arrive at the camp, bought some other claims from the Brown brothers. By 1877, Osborne needed more capital to work the bulk ores but George Hearst had lost faith in the mines. So Osborne found new investors in Los Angeles and formed the Los Angeles Mining and Smelting Company. He then bought the Balance properties along with the Noonday and four other mines from the Brown brothers including one named the Gunsight. The Brown's had started a town site they called Brownsville, and Osborne bought it for $100 and renamed it Tecopa. He then sold town lots at Tecopa before moving on to Resting Springs, six miles away where he installed the "Davis Pulverizer"a newfangled rotary mill. He then started selling lots at Resting Springs. Osborne's mining venture went through many fits and starts and he even tried building a mini-Sutro Tunnel to tap the Gunsight lode, 800 feet below the surface croppings. With ore proving not to be rich enough, and the shareholders not willing to pay another stock assessment, the firm shut down in 1881. In 1883, Osborne bought the properties back and spent a lot of money and the next two decades trying to find a cheap way to get the ore to the smelter. He held on until 1906, when the Tonopah and Tidewater tracks came within 6 miles of the mines. Osborne then sold his interest for $175,000. The new owners eventually shipped $4 million of ore and it became the biggest metal mine in the whole of Death Valley and the Amargosa (Lingenfelter). Osborne likely carried on the company name through the twenty year period, so our certificate is from the second stage of the company's development. History from Wikipedia, Holibird and OldCompany.com (old stock certificate research service) R.J. Journal of Las Vegas, Sunday May 17, 1998 Margo Bartlett Pesek - Trip of the week Article Post Office records for Hamilton Nevada, June, 1870 Richard Lingenfelter, page 138, 139, 140