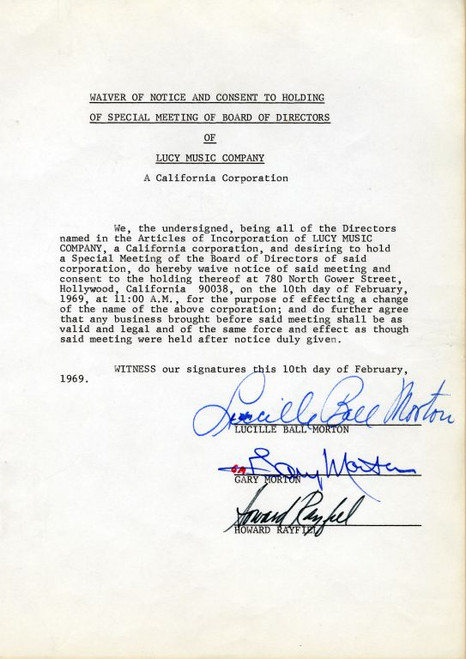 Waiver of Notice and Censent to Holding of Special meeting of Board of Directors of Lucy Music Company hand signed by Lucille Ball - Morton, Gary Morton and Howard Rayfield dated February 10, 1969. 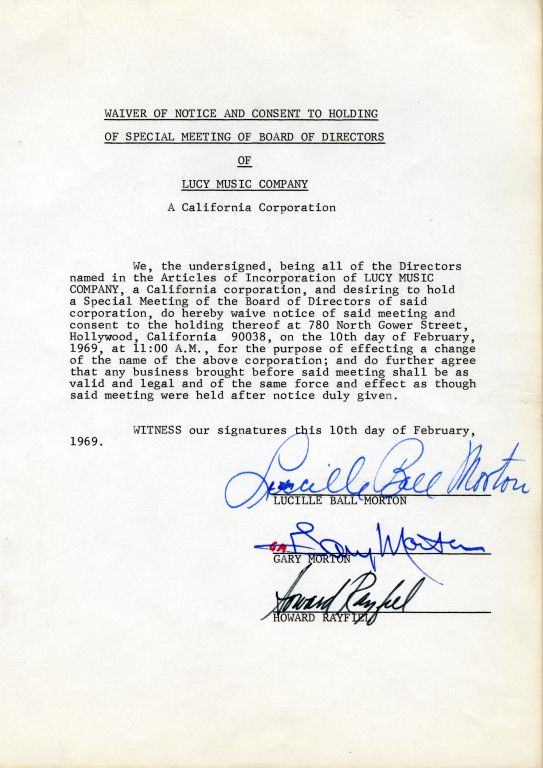 Signatures
In 1960, Gary Morton met Lucille Ball in New York City a few months before she opened on Broadway in the musical Wildcat. Morton claimed he was always busy working nights, so had not seen the beloved series I Love Lucy. They were married on November 19, 1961 at the Marble Collegiate Church in New York. Morton signed a prenuptial agreement to stifle rumors that he was a gold digger. Morton was 13 years younger than Lucille Ball. Morton became closely involved in the management of his wife's career, from the time of their marriage in 1961 throughout the remainder of her career. During Ball's solo years as the titular head of Desilu Productions, Morton and his brother-in-law, Fred Ball, served on the studio's Board of Directors in various capacities. After the sale of Desilu to Gulf+Western in 1967, Morton helped Ball form Lucille Ball Productions to allow her to have more of a free hand in television production. Morton served as executive producer of Ball's third series Here's Lucy (19681974), and was a co-executive producer of her ill-fated 1986 series Life With Lucy. Aside from producing tasks, he warmed up Ball's audiences before her entrance. He also played bit parts in Ball's various series and acted occasionally in films. The Lucy Music Company was a subsidiary of Lucille Ball Productions, Inc. and was incorporated in 1968. History from Encyberpedia and OldCompany.com (old stock certificate research service)