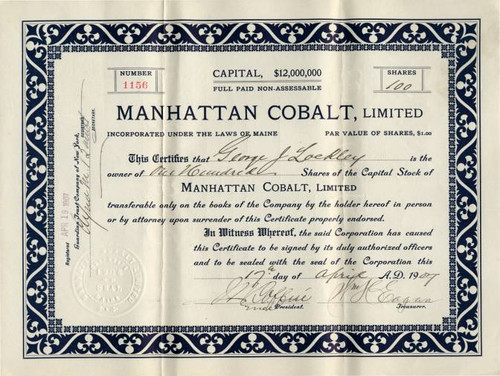 Beautiful certificate from the Manhattan Cobalt Limited issued in 1907. This historic document has an ornate border around it with a vignette of the company name. This item has the original signatures of the Company's Vice-President, and Treasurer, and is over 106 years old.

Certificate
Cobalt is a chemical element with symbol Co and atomic number 27. Like nickel, cobalt in the Earth's crust is found only in chemically combined form, save for small deposits found in alloys of natural meteoric iron. The free element, produced by reductive smelting, is a hard, lustrous, silver-gray metal. Cobalt-based blue pigments (cobalt blue) have been used since ancient times for jewelry and paints, and to impart a distinctive blue tint to glass, but the color was later thought by alchemists to be due to the known metal bismuth. Miners had long used the name kobold ore (German for goblin ore) for some of the blue-pigment producing minerals; they were named because they were poor in known metals and gave poisonous arsenic-containing fumes upon smelting. In 1735, such ores were found to be reducible to a new metal (the first discovered since ancient times), and this was ultimately named for the kobold. Today, some cobalt is produced specifically from various metallic-lustered ores, for example cobaltite (CoAsS), but the main source of the element is as a by-product of copper and nickel mining. The copper belt in the Democratic Republic of the Congo and Zambia yields most of the cobalt mined worldwide. Cobalt is primarily used as the metal, in the preparation of magnetic, wear-resistant and high-strength alloys. Its compounds cobalt silicate and cobalt(II) aluminate (CoAl2O4, cobalt blue) give a distinctive deep blue color to glass, smalt, ceramics, inks, paints and varnishes. Cobalt occurs naturally as only one stable isotope, cobalt-59. Cobalt-60 is a commercially important radioisotope, used as a radioactive tracer and for the production of high intensity gamma rays. Cobalt is the active center of coenzymes called cobalamins, the most common example of which is vitamin B12. As such it is an essential trace dietary mineral for all animals. Cobalt in inorganic form is also an active nutrient for bacteria, algae and fungi. History from Wikipedia and OldCompany.com (old stock certificate research service)