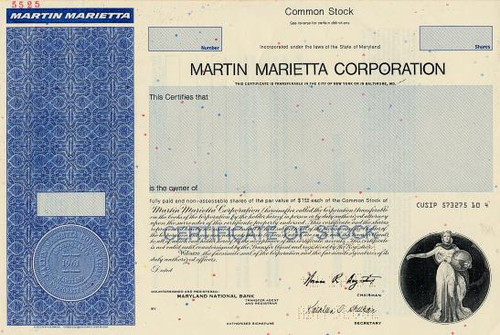 Beautifully engraved specimen certificate from Martin Marietta Corporation dated 1991. This historic document was printed by Security Columbian Bank Note Company and has an ornate border around it with a vignette of a woman holding a globe. This item has the printed signatures of the Company's President and Secretary and is over 14 years old. 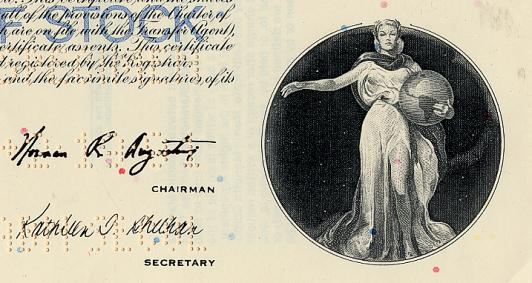 Certificate Vignette
Martin Marietta Corporation was founded in 1961 through the merger of The Martin Company and American-Marietta Corporation. The combined company became a leader in aggregates, cement, chemicals, aerospace, and electronics. In 1982, Martin Marietta was subject to a hostile takeover bid by the Bendix Corporation. Bendix bought the majority of Martin Marietta shares and in effect owned the company. However Martin Marietta's management used the short time separating ownership and control to sell non-core businesses and launch its own hostile takeover of Bendix (the Pac-Man Defense). The end of this extraordinarily bitter battle saw Martin Marietta survive and Bendix was bought by Allied Corporation. 1961: Martin Marietta formed by merger of the Glenn L. Martin Company and American-Marietta Corporation 1982: Bendix Corporation's attempted takeover ends in its own sale to Allied Corporation, Martin Marietta survives. 1986: Wins contract to build the Titan II, the Martin Company built the Titan I. 1987: Electronics & Missiles Group formed, headquartered in Orlando 1991: Electronics & Missiles Group reorganized into the Electronics, Information & Missiles Group 1992: Acquires General Electric Aerospace for $3bn, allowing combined marketing of complementary systems, e.g. Martin Marietta's Titan missiles launching GE Aerospace's satellites. 1993: Acquires management contract for Sandia Corporation. 1993: Acquires General Dynamics' space systems unit 1994: Martin Marietta completed its initial public offering of 19 percent of common stock and is listed on the New York Stock Exchange as MLM. 1995: Martin Marietta merged with Lockheed Corporation to form Lockheed Martin 1996: Lockheed Martin splits off Martin Marietta Materials as a separate and independent entity. History from Wikipedia. About Specimens Specimen Certificates are actual certificates that have never been issued. They were usually kept by the printers in their permanent archives as their only example of a particular certificate. Sometimes you will see a hand stamp on the certificate that says "Do not remove from file". Specimens were also used to show prospective clients different types of certificate designs that were available. Specimen certificates are usually much scarcer than issued certificates. In fact, many times they are the only way to get a certificate for a particular company because the issued certificates were redeemed and destroyed. In a few instances, Specimen certificates we made for a company but were never used because a different design was chosen by the company. These certificates are normally stamped "Specimen" or they have small holes spelling the word specimen. Most of the time they don't have a serial number, or they have a serial number of 00000. This is an exciting sector of the hobby that grown in popularity over the past several years.