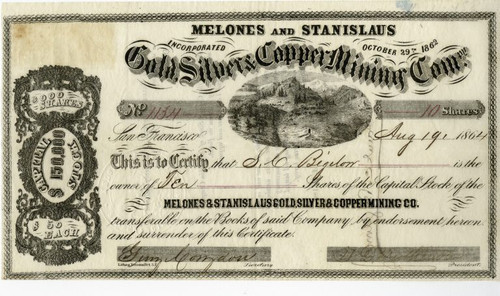 Beautiful Rare certificate from the Melones & Stanislaus Gold, Silver, & Copper Mining Co. - 1864 This historic document was printed by the American Banknote Company and has an ornate border around it with a vignette of an eagle. This item has the signatures of the Company's President and Secretary. 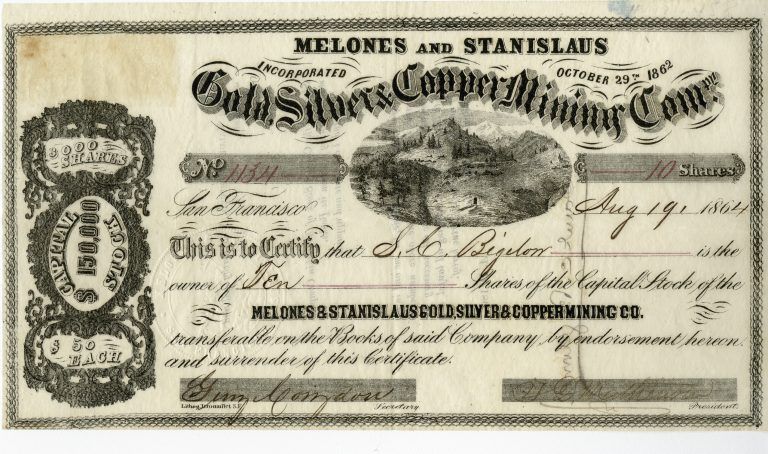 Certificate
Incorporated October 29, 1862. No. 1134, issued for 10 shares to SC Bigelow on Aug. 19th, 1864 in San Francisco. Signed by secretary Ginzel Longdon and president J. D. Matterson. Not cancelled. Black border and print, mountain vignette. Drouaillet printer. Folds, light other wear. No reveune stamp. 5.25 x 9.5" In 1863, the trustees were Gariel Stevenot, BE Auger, E Cazalis, and AC Day. On April 27, 1863 the Sacramento Daily Union reported that the Melones and Stanislaus had discovered richer quartz than had ever been discovered before in that famous locality at Carson Hill. Carson Hill, by the way, went by Melones and Stanislaus Flat in its early days! City: Calaveras County, Carson Hill State: California Date: 1864 History from Wikipedia, Holabird and OldCompany.com (old stock certificate research service)