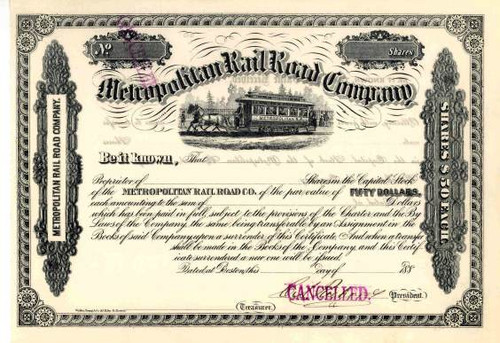 Beautifully engraved signed and unissued certificate from the Metropolitan Railroad Company printed in the 1880's. This historic document was printed by Walker, Young & Company and has an ornate border around it with a vignette of a historic railroad car being pulled along by two horses. This certificate is over 114 years old.

Certificate Vignette
In the late 1880's, there were over 500 horse car railway lines running in some 300 cities around the U.S. Over 100,000 animals were used in these operations. The average horse was expected to work only 4 or 5 hours a day which equated to pull the car 12 to 15 miles per day. The horse had to be stabled for the rest of the day as well as having to be fed, usually three times a day. On average, a horse consumed about 30 pounds of feed and hay per day. The Metropolitan Railroad in Boston used 3,600 horse to operate its 700 cars. On November 12, 1887, the West End Street Railway acquired the Metropolitan Railroad, South Boston Railroad, and the Boston Consolidated Street Railway.