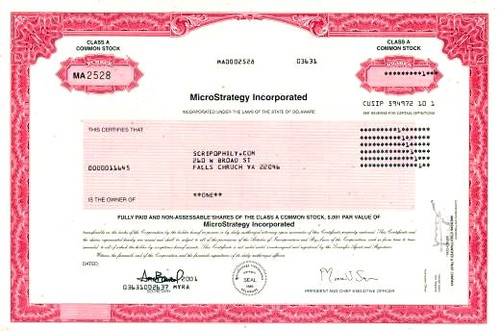 Beautifully engraved certificate from the MicroStrategy Incorporated issued in 2001. This historic document was printed by the Banknote Corporation of America and has an ornate border around it. This item has the printed signatures of the Company's President/CEO, Michael Saylor and its Secretary. 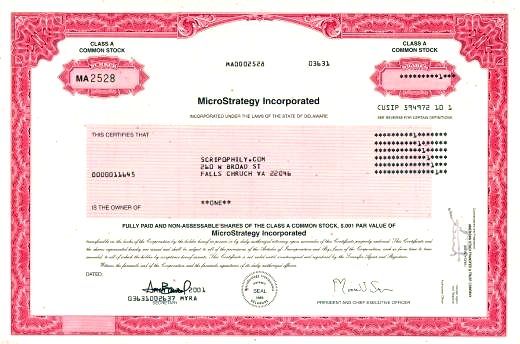 Certificate
MicroStrategy Incorporated is a company that provides business intelligence (BI), mobile software, and cloud-based services. Founded in 1989 by Michael J. Saylor and Sanju Bansal, the firm develops software to analyze internal and external data in order to make business decisions and to develop mobile apps. It is a public company headquartered in Tysons Corner, Virginia, in the Washington metropolitan area. Its primary business analytics competitors include SAP AG Business Objects, IBM Cognos, and Oracle Corporation's BI Platform. Saylor is the CEO and chairman of the board. Saylor started MicroStrategy in 1989 with a consulting contract from DuPont, which provided Saylor with $250,000 in start-up capital and office space in Wilmington, Delaware. Saylor was soon joined by company co-founder Sanju Bansal, whom he had met while the two were students at Massachusetts Institute of Technology.[6] The company produced software for data mining and business intelligence using nonlinear mathematics, an idea inspired by a course on systems-dynamics theory that they took at MIT. In 1992, MicroStrategy gained its first major client when it signed a $10 million contract with McDonald's. It increased revenues by 100% each year between 1990 and 1996.[6] In 1994, the company's offices and its 50 employees moved from Delaware to Tysons Corner, Virginia. On June 11, 1998, MicroStrategy became a public company via an initial public offering. In 2000, the company founded Alarm.com as part of its research and development unit. On March 20, 2000, after a review of its accounting practices, the company announced that it would restate its financial results for the preceding two years. Its stock price, which had risen from $7 per share to as high as $333 per share in a year, fell $120 per share, or 62%, in a day in what is regarded as the bursting of the dot-com bubble. In December 2000, the U.S. Securities and Exchange Commission brought charges against the company and its executives. A lawsuit was subsequently filed against MicroStrategy and certain of its officials over fraud. In December 2000, Saylor, Bansal, and the company's former CFO settled with the SEC without admitting wrongdoing, each paying $350,000 in fines. The officers also paid a combined total of $10 million in disgorgement. The company settled with the SEC, hiring an independent director to ensure regulatory compliance. In February 2009, MicroStrategy sold Alarm.com to venture capital firm ABS Capital Partners for $27.7 million. The company introduced OLAP Services with a shared data set cache, to accelerate reports and ad hoc queries. In 2010, the company began developing and deploying business intelligence software for mobile platforms, such as the iPhone and iPad. In 2011, the company expanded its offerings to include a cloud-based service, MicroStrategy Cloud. In 2013, MicroStrategy sold Angel to Genesys Telecommunications Laboratories for $110 Million. In January 2014, the company announced a new feature of the platform called PRIME (Parallel Relational In-Memory Engine), co-developed with Facebook. In October 2014 the company announced plans to lay off 770 employees, a month after reducing Saylor's salary from $875,000 to $1 at his request. In June 2015, MicroStrategy announced the general availability of MicroStrategy 10. In the Fall of 2018, the company released Microstrategy 11. In January 2019, MicroStrategy announced the general availability of MicroStrategy 2019. In February 2020, the company announced its latest release, Microstrategy 2020, including a new design for its HyperIntelligence analytics tool. In August 2020, MicroStrategy invested $250 million in Bitcoin as a treasury reserve asset, citing declining returns from cash, a weakening dollar and other global macroeconomic factors. The company made several additional large purchases of Bitcoin later in the year; in total the company spent over $1 billion purchasing Bitcoin in 2020 at an average purchase price of about $15,964 per Bitcoin. Michael J. Saylor is the main driver behind this strategy. History from Wikipedia and OldCompany.com and RM Smythe (old stock certificate research service)