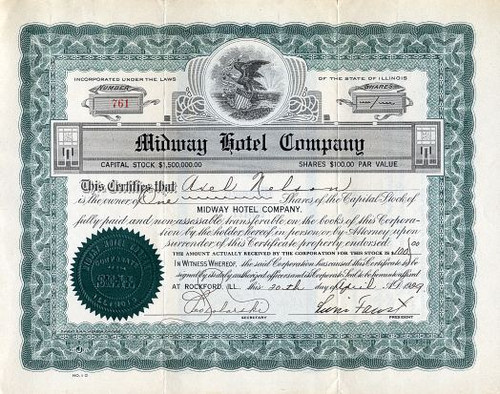 Beautiful certificate from the Midway Hotel Company issued in 1929 This historic document was printed by the Dwight E. M. W. Jackson Company and has an ornate border around it with a vignette of an eagle with a union shield. This item has the signatures of the Company's President, Levin Faust, and Secretary, Leo Solarski and is over 80 years old. 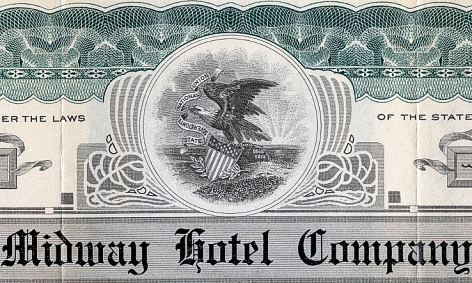 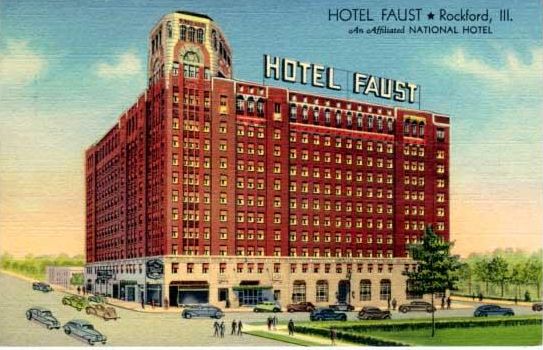 Old Postcard shown for illustrative purposes
The Faust Landmark, formerly known as the Faust Hotel (or Hotel Faust) and Tebala Towers, is located on East State Street, is one of the largest buildings in downtown Rockford, Illinois, United States. In April, 1929 the Faust Hotel opened. It was named for Levin Faust, who was born in Sweden in 1863, came to Rockford in 1887, and helped found the Mechanics Machine Company. Faust also helped organize the Rockford Park Commission. A Historic Landmark, the Faust is 15 stories tall (186 ft., 57 m) and is capped by a flagpole over the penthouse with a large U.S. flag that flies 24 hours a day. The "Faust" is still Rockford's tallest building. Before 1980 the hotel was also adorned with a set of large red neon letters in a double row that proclaimed Faust Hotel and later, Tebala Towers on the north top side and the east top side of the building. In the early 1980s a fierce windstorm knocked down some of the letters, damaging the building and putting pedestrians & residents at risk. All of these letters were taken down shortly after this incident. Plans to place a large replica of a 'Fez' Cap over the penthouse, at the base of the flagpole, which was abandoned as impractical. At the end of World War II, during VJ day, the center for much of the celebration in Rockford took place in the area of the Faust hotel and the nearby Midway theater. In its heyday, the Faust was known as the premier hotel for Rockford, hosting such dignitaries as President Dwight D. Eisenhower and the 1960 Democratic Presidential candidate John F. Kennedy, as well as one of the Kings of Sweden during a visit to the Swedish community located in Rockford. Faust was also the co founder of the Sundstrand Corporation established in 1905 in the predominately Swedish town of Rockford, Illinois. History from Wikipedia and OldCompany.com (old stock certificate research service).