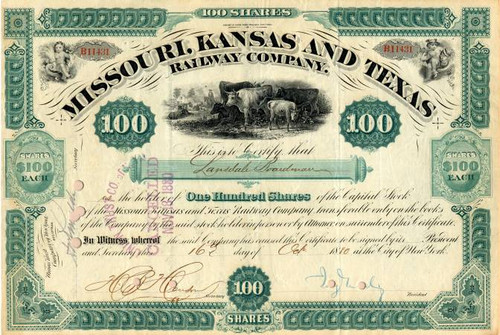 Beautiful certificate from the Missouri, Kansas and Texas Railway Company issued in 1880. This historic document was printed by the American Bank Note Company and has an ornate border around it with a vignette of cattle. This item has the original signatures of the Company's President, and Secretary, and is over 136 years old. Punched cancelled.

Certificate Vignette
This certificate was signed by the famous Robber Baron Jay Gould as president. Jay Gould 1836-1892, American financier. He was born in Roxbury, New York. In 1859 he became a stockbroker in New York City and began his association with American speculators James Fisk and Daniel Drew. Through stock manipulation they gained control of the Erie Railroad from American industrialist Cornelius Vanderbilt. In 1869 Gould attempted to corner the gold market, causing a sudden drop in gold prices and one of the worst panics in American financial history, the famous Black Friday of September 24, 1869. The M-K-T Railroad was born on May 23, 1870. The actually KATY started as the Union Pacific Railway, Southern Branch a year earlier. Building southeast from Junction City, Kansas, the railway was renamed the Missouri, Kansas & Texas Railway in 1870, and then the M-K-T in 1923. Although most of the track was built by the Katy many sm all railway companies were acquirred and incorporated into the system. Several of these railroad were building in Missouri and Kansas to connect the mainline and start a race for the OPENING of the GREAT SOUTHWEST. Thus began a race for Land Grants promised to the first railroad company reaching the Kansas border with the Indian Territories, later to become the state of Oklahoma. Winning the race brought prior rights to continue building through the frontier to Texas. Building a mile of track per day, the race to the Kansas border was won on June 6, 1870. Ironically these land rights were later denied in 1907 when the Oklahoma Territory became a state and all grants were denied by the United States Supreme Court. The mainline was building southward, reaching Chetopa, Kansas in June of 1869. Four small railway companies controlled by the Katy were also building the line from different directions. The part of the line from Sedalia, Missouri to the border with Kansas and was completed south to Ft. Scott, Kansas in December of 1870. This line would be connected to the mainline at the future site of Parsons in Feburary of 1871. The first townsite in the city, named for the lines first president, Levi Parsons would be sold in March. In October 1871 track gangs from the Katy and the Alantic & Pacific, (Frisco) would take part in the Battle of Vinita over the placement of a crossing. This would become the town of Vinita, Oklahoma, where later the jointly operated Texas Special would leave Frisco rails from St. Louis and use the Katy to San Antonio. Building the line south into the Indian Nations would become a struggle during an unbearable hot summer, track gangs named this portion of the railway Trail of Tears. Despite the heat, sickness and other pestilence, Katy track gangs were still building track a mile a day. The line was built into the Creek and Cherokee Nations during the middle of 1871 and reached the Arkansas River near the future site of Muskogee by October. The 150 miles of track south of Muskogee would proceed through the Choctaw and Chicksaw Nations along the Texas Trail. The line continued building accross two forks of the Canadian River and on to the future site of McAlester. After proceeding to Atoka and Durant, the line reached the Red River and the Texas border by November 1872. also in 1871, tracks were laid from Paola, Kansas to Holden, Missouri, and later extended to Sedalia, Missouri. The extension of the line into St. Louis and the acquiring of the Kansas City and Pacific Railroad Company with it's trackage rights into Kansas City were completed by 1899. Back at the Red River, the Katy track gangs became the first railroad to cross the border into Texas in December of 1872. A pioneer city named for the lines first Vice President, James Denison was started here shortly after crossing the border. construction continued southeast to Greenville and also to westerly to Whitesboro and Gainesville in 1880. The Dallas and Wichita Rwy. Co. was purchased between Dallas and Denton in 1881. Trackage rights were obtained on the Texas and Pacific R.R. between Whitesboro and Ft. Worth the same year. This completed direct access to both Dallas and Ft. Worth, giving Katy passengers and frieght faster service. Later the Greenville to Dallas section would be finished giving access to Dallas on Katy rails from Denison. several branch lines were built after the mainline was completed from Ft. Worth to Waco, Temple and south to Taylor in 1881. Also a Greenville to Mineola branch, another to Belton, just south of Temple. And a 10 mile line to Cleburne, then a 24 mile branch to Bonham. All of these branch lines would later be sold or abandonded. Also finished in 1881, the only narrow gauge line in the system, later sold to the Louisiana, Arkansas, & Texas Railway (KCS). This 124 mile line ran between Greenville and Jefferson. It was converted to standard gauge in 1893 and extended to McKinney to the west and east to Shreveport, Louisiana while a still a Katy line. The Katy also completed it's orphan line between Trinity and Colmesneil in southeast Texas during the same year. After a branch between Denison and Sherman was completed in 1890, the line continued building south of Dallas reaching Hillsboro. This connected the mainline south to Austin and San Antonio. After reaching Houston during 1893 the Katy purchased part ownership in the Galveston, Houston, and Henderson Railroad. This provided access to the port of Galveston and completed the south portion of the line. History from Wikipedia and OldCompany.com (old stock certificate research service)